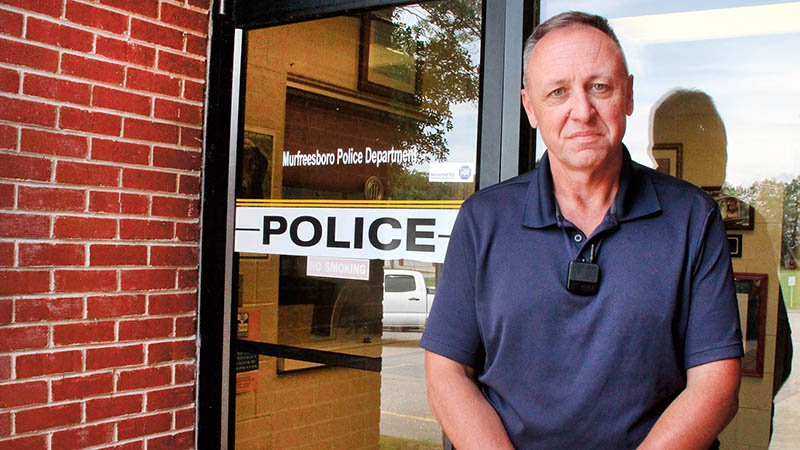 Veteran law enforcement officer Darryl Rowe retired on Wednesday of this week as the Chief of Police in the town of Murfreesboro. | Staff Photo by Cal Bryant

MURFREESBORO – Counting his time in the military and law enforcement, Darryl Rowe, now age 52, has, in his words, “toted a gun” since the age of 17.

But there always comes a time for one chapter in a person’s life to end and another begin. For Rowe, the book on his law enforcement career closed at 5 p.m. on Wednesday, May 31 upon his retirement as Chief of the Murfreesboro Police Department.

His official retirement date is Dec. 1, but after 26 years with the Murfreesboro Police, to include 18 years as Chief, a person in that position accumulates hundreds of hours in compensation pay – to include working nights, weekends and holidays.

“Mine is a 24/7/365 type of job,” said Rowe, sitting at his desk on Tuesday afternoon. “Sure, I have days off and have used vacation time, but all those other hours, sometimes working around the clock to the point you don’t know which day of the week it is, accumulate.” A native of the Faison’s Old Tavern community in Northampton County, Rowe graduated in 1983 from Northampton County High School-East. He attended Campbell University, majoring in Government, and later graduated from Chowan University with a degree in Criminal Justice.

Along the way he served in the Army National Guard Reserves from 1982-89.

In 1989, Rowe landed his first job in law enforcement, hired as a Deputy Sheriff in Northampton County. That came at nearly the same time he completed his Basic Law Enforcement Training classes at Halifax Community College.

“The now late Sheriff Ellis Squire hired me,” Rowe remembered. “Back then we had a limited staff, so only two deputies worked per shift to cover the whole county – one working the east end and the other covering the west end. You didn’t have any immediate back-up; the only back-up you had came from either Hertford County or Halifax County, depending in which end of Northampton you were working.”

Looking back at those times, Rowe stressed they were often dangerous in nature due to being the lone lawman facing numerous individuals, but he said those types of encounters served as training.

“You learned how to be independent, think fast on your feet, and take care of yourself,” he stated.

At that time, young police officers in the Roanoke-Chowan area had plenty of role models in the same profession to look up to.

“I admired the work of Ted Sumner (then of the Northampton Sheriff’s Office) and Wesley Liverman (a longtime Hertford County deputy and the first Commander of the Roanoke-Chowan Narcotics Task Force),” Rowe recalled. “I tried to emulate them. I was more afraid of them thinking I wasn’t good enough to be a police officer than I was of getting hurt.”

In 1991, Rowe accepted an offer from then Murfreesboro Police Chief Ed Harris to fill the position of Detective.

“I’ve been here ever since,” remarked Rowe.

“Until Wednesday (May 31) of course,” he added with a laugh.

Two years following Harris’s death in 1997, Rowe was promoted to Chief of Police.

“I quickly found out that a Police Chief is only as good as the officers around him,” Rowe noted. “I learned very early that the key to running a successful police department is to hire and surround yourself with good people. I refuse to fill a spot with a warm body; you have to have a passion for police work if you wanted to work in this department.”

With nearly 30 years under his belt, Rowe has witnessed a lot of change in police work.

“The growth in technology tops that list of change,” he said. “I thought I had it good back when I first became an officer, but that pales in comparison to what lawmen have at their disposal today.”

“It’s been amazing to watch our profession grow in technology,” he stated.

Police training is another area of growth.

“Officers today are better trained and far better educated than when I first started,” Rowe noted. “They need that training more so today than ever before because it’s a much more dangerous world out there than when I first came along. The level of criminal violence has increased.”

Rowe referenced the increased danger as more of a generational change than a social one.

“Today, younger people are more into immediate gratification, and I’m sure than comes from technology,” he said.

Rowe admitted that he relies on his younger officers to keep up with the ever-changing world of technology.

“I’ve been fortunate to have some of the best officers ever working for me and this town,” Rowe boasted. “You train them, you teach them, you show them where the ditches are and let them go do their job. But when it comes to technology, my young officers have shown me a thing or two as well. I grew up going to a library; my young officers grew up with a computer, so I delegate a lot of that type of work to them.”

Over all these years in law enforcement, with so many chances to advance his career, Rowe admitted he was always content with the job he had since arriving in Murfreesboro 26 years ago.

“I’ve loved my job here; I didn’t want to go anywhere else,” Rowe said in responding to a question about possibly seeking the position of County Sheriff or moving to a larger city’s police department.

“To me it’s a trade-off,” he continued. “If you go to work at a larger department you have the opportunity to specialize and be promoted within different units. But when you work with a small town agency, like here in Murfreesboro, you learn to do it all. And when you make a good arrest, you can see how that makes a difference in the community.

“I love the citizens of this town; there’s not a house or a building here that I haven’t been in,” Rowe added. “I have interaction with everyone in this town, and I hope it’s all been good.”

“That’s not a reflection on me, but rather on the officers here,” he stressed. “I feel certain that the townspeople will be in good hands with the police officers that remain here. I’ve done the best I could all these years and now it’s someone else’s turn to lead this department.”

“I know my family is looking forward to me having some leisure time to spend with them,” said Rowe of his wife, Donna, their two daughters, Amanda Rowe Ross and Kristen Rowe, a son, Matthew Rowe, and three-year-old grandson Brantley Ross.

“It will take me some time to de-program after being on call 24/7 every year, but I’m ready for this next stage of my life,” Rowe said. “I may consider some contract work as a teacher for police academies, especially those overseas. I taught a two-week class, through the Department of Justice, in the Philippines in September of last year and thoroughly enjoyed it.

“I’m leaving with no regrets; I’m leaving with the fact that I’ve always treated everyone, no matter their status in our little town, the exact same way. I’m leaving the same way I came here….being firm, but fair, and using common sense,” Rowe concluded.