A native of Beaufort County, Mr. Wallace was born on June 23, 1931, to Linyear Mayo and Fidelia Woolard Wallace, Sr. in Washington, NC. LM graduated from Washington High School and served his country in the United States Navy during the Korean War. Following his service to his country, he attended East Carolina University and graduated with his Master’s Degree. 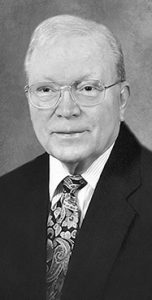 Besides his parents he was preceded in death by his sister, Mary Wallace Ollar, and his brother, Joshua Edward Wallace.

In lieu of flowers, memorial donations may be made to Chowan University, One University Drive, Murfreesboro, NC 27855; Woodland Baptist Church, PO Box 444, Woodland NC 27897 directly or by visiting tmcfunding.com/search, type, LM Wallace; or a charity of your choice.

Garrett-Sykes Funeral Service – Rich Square Chapel is handling the arrangements for the Wallace family and online condolences can be directed to the family by visiting www.garrettsykesfs.com.