MURFREESBORO – The Chowan University Commencement, held May 6, celebrated the accomplishments of 217 students who received degrees ranging from Associates to Masters. Students typically spent anywhere from two to five years focusing on their studies.

In addition to the standard degrees awarded each May, a unique honor was bestowed upon Linda Ann Fleming White, for her 31-year commitment to Christian Higher Education.

Mrs. White found herself at Chowan University 14 years ago when her husband, President Chris White, took on the challenge and opportunity of reviving the school for what they planned to be a one-year appointment. Her friends and family describe her as someone who leads from behind, not seeking recognition, but hoping to improve the lives of all those around her. 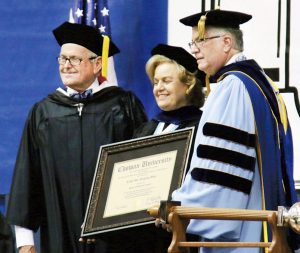 Dr. Linda Ann Fleming White is shown receiving the Honorary Doctorate of Human Letters on May 6 at Chowan University.

Her husband describes her as his rock, his companion, his number one teammate, and his life-long partner. The White’s have been married for over 50 years, yet Dr. White’s eyes still light up when he talks about his beautiful bride.

Often, her accomplishments are never accredited directly to her. However, they are seen and felt by students, faculty, staff and community members. She serves as an unofficial development officer, forging relationships with donors who have given significant gifts to the University because she shared her passion for Chowan with them. Her design skills can be seen throughout campus as she is a creative and effective campus decorator.

She has served alongside Dr. White for 31 years as leaders of once struggling universities. Both Chowan University and Gardner-Webb University saw unprecedented growth and prosperity under the dynamic duo. She has served with distinction and class. She is passionate about education and an energetic student advocate, as evident through the endowed scholarship for teacher education she funded.

Mrs. White’s top priority is family. She and Dr. White have two sons, two daughters-in-law, and six grandchildren. Marty, the oldest son, is an attorney in Charlotte. Andrew, the youngest, is a hedge fund manager in West Palm Beach, FL. They also have a rather large family in Chowan University.

Mrs. White found her passion for education at a young age. She was in elementary school when she became the teacher’s assistant and from there graduated with honors from Hart County High School, Harwell Georgia. She went on to earn her bachelor’s degree in elementary education from Tift College in Forsyth, GA, and completed graduate work at Georgia State University in Atlanta, GA. Prior to serving as First Lady of two universities, Mrs. White was a highly regarded elementary school teacher in Kentucky, Georgia, and North Carolina.

In 2013, Mrs. White received the prestigious Spirit of Chowan Award for meritorious service. In 2016, the Murfreesboro Rotary Club recognized her as the Paul Harris Fellow.

The Board of Trustees of Chowan University now confers upon Mrs. Linda Ann Fleming White the highest honor available, the Honorary Doctorate of Humane Letters, for her service to Christian higher education, contribution to public education across multiple states, serving as a role model for thousands of young college students, faculty, and staff, and for her contributions to the life of Murfreesboro and the surrounding region.

Dr. White shared that Mrs. White is a humble woman who does not need or desire recognition. She leads with her heart, and shares her passion with those around her. However, The Board of Trustees felt a woman of this caliber, that Chowan University has had the honor and privilege to call First Lady, deserved nothing less than the highest honor they could award her.