Before one of the largest crowds in recent memory to witness a junior American Legion baseball game, Post 102 topped Windsor Post-37 by a score of 10-5 here Monday evening to cap off Memorial Day Weekend.

Prior to the game several veterans and active duty military members were introduced and the fallen were saluted with an emotional bugle playing of ‘Taps’.

Once the action on the field began, Ahoskie opened the scoring with a run in the bottom of the second inning when Trevor Lee walked, stole second and third base, and scored on Edward Bradley’s RBI single to centerfield for a 1-0 Braves lead. 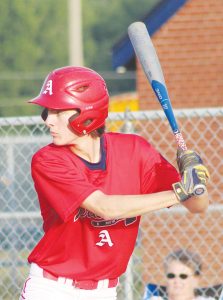 Windsor answered with three runs in the top of the third. Zeb Askew singled to right and scored the tying run on Trenton White’s RBI double into the gap in left centerfield. The Rebels then loaded the bases and White scored on a Caleb Damo RBI infield single. The third run (Cottle) scored on Brandon Ball’s bases-loaded walk. Windsor led 3-1 after three.

The Rebels added another run in the top of the fourth when Jarrett Burden singled and went to second on an error on the play. After Luther Glover sacrificed Burden to third, he scored on an RBI single by Askew for a 4-1 Windsor lead.

Ahoskie scored five runs in the bottom of the fourth. Evan Lassiter and Spencer Simonowich reached base and advanced into scoring position on Ethan Hughson’s sacrifice. Both scored later on separate wild pitches. After back-to-back singles by Bradley and Alden Lassiter, Bradley scored on a Tyrek Beverly base hit to right as Beverly and Lassiter moved into scoring position on the throw. Ryan Rowe then ripped a two-run single scoring both runs for a 6-4 Ahoskie lead after four.

Post 102 added another run in the bottom of the fifth when Evan Lassiter tripled and scored on Simonowich’s RBI to center for a 7-4 Braves lead.

Ahoskie got their final three runs in the bottom of the sixth on a Javier Correa RBI double and a two run single by Simonowich that made it 10-4, Braves, after six.

Trent Hobbs pitched two innings in relief of starter Trent Munford and got the win. Munford went three-and-a-third and Evan Lassiter pitched the final inning and a third for the save.

Ahoskie had 10 hits: two each by Bradley and Simonowich as Rowe, Correa, Beverly, Parker Bradley, Evan Lassiter, and Alden Lassiter had one hit apiece.

Windsor tallied eight hits with Askew and White having two each and Cottle, Damo, Ball, and Burden with one apiece.

“We didn’t quit,” said Ahoskie coach David Ellis. “They jumped on us, but we started hitting the ball. Hobbs did the job on the mound and Evan came in and closed out the win.”

“We took our foot off the gas when we went ahead 4-1,” said Windsor coach Bobby Harmon. “We got complacent while Ahoskie hit the ball and made the plays.”

Windsor saw its four-game win streak snapped and falls to 4-2. They will begin a six-game home stand Wednesday with Perquimans at Bertie High Field.

Ahoskie raises its record to 2-2 and will play its next three on the road: at Washington tonight (Thursday) at 7, and a double-header at Clayton Post-71 in Wendell on Saturday at 3 p.m.