The title of the younger Davis’ article, “It’s Tom Sawyer!” (No it ain’t . . . it’ Huck Finn!),” is adapted from a remark by Aunt Sally Phelps when she mistakenly identifies Huck as her nephew Tom in chapter 32 of the novel. Davis recounts many ways, thanks in part to popular culture, that Tom and Huck are confused by readers. 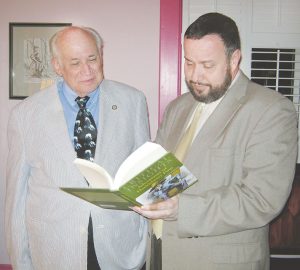 Dr. John H. Davis is a Professor of English at Chowan University, while his son, Hugh H. Davis is an English instructor at C.S. Brown-Stem High School.

Both Davises, father and son, are published extensively on various literary topics, but the Twanian is the elder Davis with this article being only the third published Twain article for the younger Davis.

Dr. Davis traces his interest in Mark Twain to his high school days, an interest that continued and grew through his undergraduate studies at Alabama College (now University of Montevallo) and graduate work at Auburn University. At the time that he decided to pursue Mark Twain as a subject for both his M.A. thesis and Ph.D. dissertation, few scholars were choosing Twain as the their field of interest.

It was about that same time, however, that the University of California at Berkeley began working on Twain’s papers, reissuing books that were published in Twain’s lifetime and publishing previously unpublished material. It is said that Twain left a larger body of unpublished work than published. Consequently, interest in Twain has grown, and Twain scholars are now to be found everywhere.

Although the younger Davis primarily pursued studies in British literature (B.A., University of North Carolina at Chapel Hill; M.A., University of Tennessee), he lived in a household that accepted Twain as a guest at every meal. Thus, it was only logical that he would eventually begin presenting and publishing articles about Twain. Davis also holds the MLS degree from East Carolina University.

Both father and son have been invited to be presenters this summer at the Eighth Quadrennial International Conference on the State of Mark Twain Studies at Elmira College/Quarry Farm in New York. Quarry Farm was the home of Samuel Clemens’ wife’s sister. When the Clemens family would visit there, Clemens as Twain would retreat to an octagonal study on the property, and it was there that Twain wrote most of the works for which he is best known, including Adventures of Huckleberry Finn.