Alden Cottle combined with battery-mate, and catcher, Wood Trowell to toss a one-hitter and go the distance in posting his first win of the season. Cottle also helped his team at the plate by rapping out a pair of hits in the 1-0 win over the Albemarle Wildcats.

The game was a scoreless duel on the mound between Cottle and Tucker Oliver of Post 84. Neither team could mount much offensive punch as the game wore on.

Several times Windsor got runners on base, a couple of times even into scoring position, only to have them stranded thanks to the Wildcats’ pitching and defense. 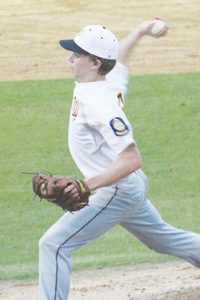 bottom of the sixth, Cottle smacked a one-out solid base hit to center. Trowell followed with a double that moved Cottle to third, giving Post-37 a chance to beat the impending rainstorm.

With Cottle running on the play, Brandon Ball then sent a first-pitch offering into the infield for a sacrifice ground-out, but the play was good enough to score the only run Windsor would need.

Cottle returned to the hill to retire the side in order for the final three outs. Just as the ump held up his fist indicating the last chance of Post 84, the rains started to pelt the field, but Windsor had claimed its third win in a row.

“I thought (Alden) and Wood were really, really good tonight,” said Post 37 coach Bobby Harmon. “He kept the ball down and pitched ahead all night. Offensively, we did just enough to win. I know it’s only been a couple of weeks, but I’m really excited about the potential these kids have.”

Windsor traveled to Chocowinity Friday night to face Post 15 at Southside High School in a game not completed by press-time. On Monday they will be in Ahoskie for a rivalry showdown with Post-102.