‘Noises Off’ served as non-stop comedy 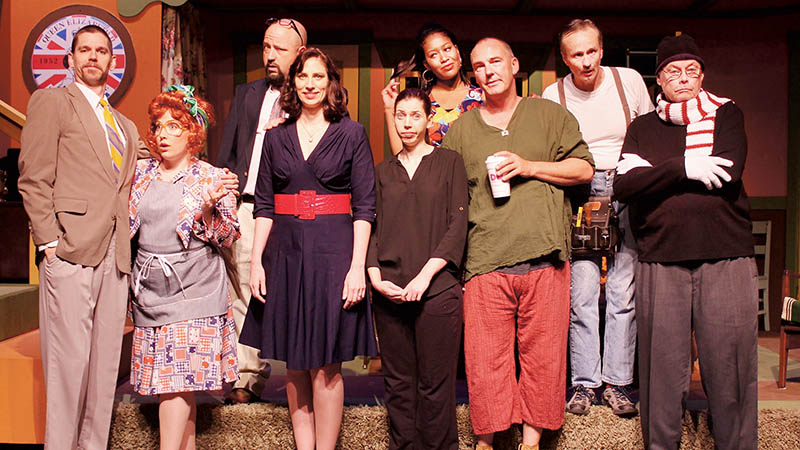 Shown here is the cast of characters that took the stage in the recently completed play “Noises Off” at Ahoskie’s Gallery Theatre. | Photo by Erin Messer

Did you see Noises Off at the Gallery Theatre? You may not know the name, but it is one of the most celebrated live comedies of all time! Why? Because of the sheer complexity of the physical timing and verbal cues needed to bring this non stop comedy to life.

When the script was read for the first time in a beginning rehearsal read through, it sounded easier than any of the veteran cast realized. Director James Shafer, besides being laden with the usual audition and rehearsal start hiccups, had to figure the best way for this diverse cast to learn one of the most complex plays in comedy history. What James decided was to tackle and introduce the actors to act two. The monster act of the play. An act that put all nine actors and both sides of a two dimensional rotating set into a play. Throw in the fact that the interaction of stage and cast was high paced and did not let up made it almost impossible to fathom at first.

As with any community or professional play, there always exists drama and unplanned situations. This one was no different. Many of the actors and actresses had prior commitments as told at the audition. What none of the cast realized is how this play differed from any other they were ever in. Missing one, two or even three rehearsals along the way is usually no big deal. However in a play so full of interactive physical comedy, dependency of another actor or actors became a necessity. In Noises Off missing a line or coming in late on a blocking cue could throw off the entire cast and the scene quicker than anything!

No one is to blame of course since most of the absences were excused. It was a shock to most involved. Then of course losing an actor even early on created a problem, since filling the role proved more difficult than expected. This prompted James to have to fill that role himself, and serve as both director and actor. Not that this is uncommon, but it proved to be another hurdle in the plays production. The fact that cast and crew rolled with it, moved on and ultimately triumphed is a direct reflection of the dedication and love for theatre and all the challenges connected to it!

Noises Off is a play about a play called Nothing On that has gone horribly wrong. You start to understand the chaotic comedic mess as it starts to build in act 1, and by the time act 2 happens it is a whirlwind of planned confusion and turmoil. It is just down right hilarious watching the cast within a cast trying to hold it together! By act 3 the laughter is continuous and contagious as all heck breaks loose in this amazing comedy!

The cast and crew were:

James Shafer, the drama teacher at Hertford County High School. Many know him as the star of many Gallery Theatre productions such as Rock of Ages and To Kill a Mockingbird. His students know him as a tireless director and inspiration. The veteran cast that makes up Noises Off have never known him in a director’s role. Shafer handled his job in this production with patience, professionalism and passion that was not only accepted but respected. In addition to being the director James also plays the character Roger/Gary, and did it wonderfully.

Hugh Davis, the Stage Manager, but ended up being so much more than that. A veteran of the Gallery Theatre stage, Hugh was basically the assistant director, under study and sometimes referee to Noises Off!

Lori Harders plays Flavia/Belinda, and is another veteran of the Gallery stage. Many may know her from her amazing performance when she played Shelby in the Gallery’s Steel Magnolias.

Fredrick/Philip was played by Norman Askew who did wonderfully with his goofy and lunk headed character.

Amy Harbin from SPAMLOT (Lady of the Lake) fame who plays Poppy. A picked on and always blamed stage hand in the play.

Lisa Askew, a newcomer to the Gallery Stage who blossomed before everyone’s eyes. Nervous turned to confidence as she grew into the role.

Dotty/Mrs. Clackett was portrayed by the versatile and talented Mamie Ballance was thoroughly enjoyable!

The character of Selsdon is a goofy over the hill alcoholic who is constantly missing when needed. That role was played to perfection by Michael Spruill.

Tim Flanagan who plays no other than the character Tim is right at home playing a tired and oblivious!

Lloyd was played by Jochen Künstler who watched his much beloved play “Nothing On” turn right before his eyes, and there is nothing he can do about it but suck on his toffees!

Honorable mentions to Zach Wise and Kailey Lassiter for being amazing under studies to the show, and always being there when they were called upon! A huge theatre thanks to Jane Ballance for helping with props and anything else asked of her! A big shout out to James Messer for building an impressive two sided rotating set, and his strong man crew for tuning it in between act!