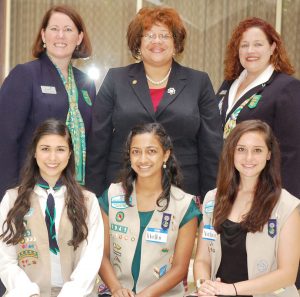 According to the Girl Scout Research Institute, North Carolina ranks number 41 among the 50 states based on 13 national measures of girls’ well-being. The State of Girls reports that in North Carolina, 24 percent of girls ages five to 17 are living in poverty, and girls who live in low-income households face considerable challenges that affect their health, happiness and achievement. When it comes to education in the state, 67 percent of eighth-grade girls are not proficient in math and 57 percent of fourth-grade girls are not proficient in reading. Girl Scouts is addressing these concerns head on by providing girls with experiences that complement learning in fun, interactive and age-appropriate ways, allowing girls to develop a positive sense of self, build healthy relationships, engage in sustainable community service opportunities and deal with challenges they face.

Highlights of the advocacy day in Raleigh included introductions by Representative Beverley Boswell during the House session and Senator Tamara Barringer during the Senate session, and meeting with and hearing from North Carolina Secretary of State Elaine Marshall, who attended the Cookies and Milk reception. Secretary Marshall spoke to the girls about how she became interested in public office and what her job entails, which involves overseeing a department of 200 employees and responsibilities such as pursuing product counterfeiting as part of trademark protection law enforcement. Marshall shared that while she was not a Girl Scout growing up, she has been a strong supporter of Girl Scouts as an adult and has served as a volunteer in an advisory capacity.

During the afternoon, representatives from the four councils toured the historic Capitol building and had an opportunity to meet Governor Roy Cooper. In the historic House Chambers room, packed with Girl Scout representatives, the Governor’s address to Girl Scouts included praise for the community service they offer, the examples they set for other youth and the importance of the Girl Scout program in developing the nation’s leaders. He ended his time with the group by signing a proclamation in recognition of 100 years of Girl Scouts selling cookies!

This advocacy day was just one of the ways that Girl Scouts works across party lines to educate and raise awareness about issues important to girls and young women. Through their advocacy efforts, Girl Scouts demonstrates to policy makers that the organization is a resource—and an authority—on issues affecting girls.