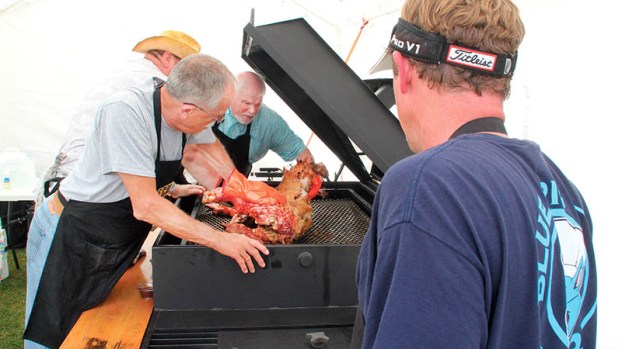 While one of the 22 chefs entered into Saturday’s event looks on, a team of North Carolina Pork Council certified judges begin the process of scoring a slow-roasted hog, a process that determined the winner of the 16th annual Roanoke-Chowan Pork Fest. | Staff Photos by Cal Bryant

One year shy of celebrating his 30th year of competitive cooking, Charlie Meeks has had plenty of time to hone his culinary craft. That experience surfaced to the top here Saturday when the 81-year-old bested 21 other swine chefs to win the 2017 title at the annual Roanoke-Chowan Pork Fest.

Entering the event held in the grounds of the Jefcoat Museum, Meeks had registered only one, top-three showing on the NC Pork Council’s Whole Hog BBQ cooking circuit this year, a third place effort at the 34th annual Pig Skin Pig Out on April 21-22 in Greenville.

“It always feels good when you hear your name called for first place,” said Meeks, who resides in the Carteret County town of Newport.

“I thought I had cooked a good pig, but you don’t know what the other guys (cooks) have,” he added. “All you can do is do your best and let the judges sort things out.”

Ironically, that three-man judging team (all certified by the NC Pork Council) had Meeks and David Hoffman (of Kinston-based Hoffman Cookers) deadlocked for first place on their scorecards.

“When all the different parts of the judging were added up, David and I had the same exact score,” Meeks noted.

If a stalemate exists, a pre-determined tiebreaker is used to separate first and second place. At the top of that list, both cookers 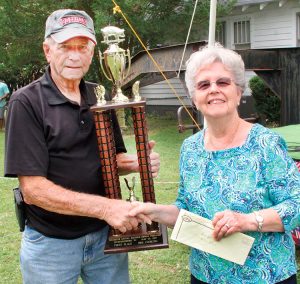 Charlie Meeks of Newport receives the R-C Pork Fest’s first-place trophy from Lynn Gray, the widow of the now late Jimmy Gray who was the original founder of the annual event now in its 16th year in Murfreesboro.

remained tied in the category of meat and sauce. Skin crispness is next on the list and that’s where Meeks used a perfect score from each of the three judges to break the tie with Hoffman.

“I guess they liked my skin,” chuckled Meeks.

Besides the first-place trophy and cash prize, Meeks also collected an extra $200 that will serve as his entry fee into the NC Pork Council’s Whole Hog BBQ cook-off later this year in Raleigh. That event will help crown North Carolina’s Pitmaster of the Year, a title Meeks won back in 2015.

Meeks also won the R-C Pork Fest title in 2015. Now with the 2017 title in hand, he has a total of four first-place finishes in Murfreesboro over the 16 years the event has been held.

“I really like coming up here,” said Meeks, referencing a 135-mile trip to Murfreesboro from Newport. “The folks here are very friendly and those who put on this event do a great job.”

Next up for Meeks is this weekend’s (May 26-27) 25th annual Battle of the BBQ in Henrico on Lake Gaston.

“I’m trying to get back to cooking at most of the events on the circuit. I’ve had a few health issues, but I’m feeling fine now,” Meeks closed.

The 2017 R-C Pork Fest attracted a total of 22 cooking teams, 11 of which were new to the Murfreesboro event.

R-C Pork Fest serves as a benefit for the Jefcoat Museum of Americana. After all the pork is cooked and judged, it is minced and doused in Murfreesboro’s top secret barbecue sauce. That provides the main course of a meal – to include potatoes, slaw and hushpuppies (also cooked on site) – served to hundreds of hungry guests attending the festival.

Brinson Paul, one of the numerous volunteers at the Jefcoat Museum, said 527 plates were served on Saturday. He also mentioned that the R-C Pork Fest has been fortunate, weather-wise, during its 16-year run.

“Over all those years we’ve not had a single drop of rain to interfere with our festival,” Paul stressed.

“Everyone that I have talked with gave it high ratings as the best barbecue yet at Pork Fest,” he stated. “Most seemed to have enough barbecue left after eating Saturday to enjoy again on Sunday for the noon meal and then some left even after that.”

For those looking to purchase Murfreesboro’s world famous barbecue, Paul said a supply (now frozen) remains on sale for $8 per pound. They can visit the Jefcoat Museum, located on High Street, for details on how to make a purchase.

“We wish to thank all of our many sponsors, workers, cooks and entertainers for helping make the 16th edition of the Roanoke-Chowan Pork Fest a success in good food, good entertainment, and good things for kids. Mark your calendar now for the 17th annual Pork Fest, which will be held on the first Saturday following Mothers Day in 2018,” Paul concluded.