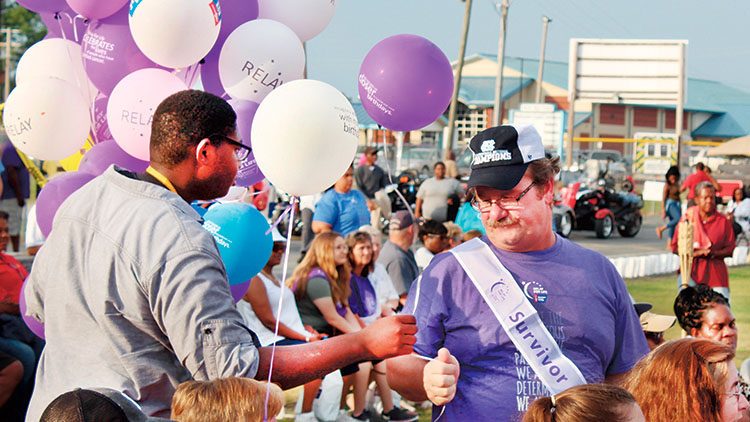 One of the cancer survivors receives a balloon at the 2017 Bertie Relay for Life event held Friday. | Staff Photos by Gene Motley

WINDSOR – The Bertie County Relay for Life, just one of many communities across the country that came together this past weekend to honor cancer survivors, remember loved ones lost, and vowed to fight back against a disease that has already taken too much.

The 24th annual event was held Friday evening as a one-day event at Roy Bond, Sr. Stadium at the old Bertie High School in Windsor.

There weren’t as many tents, or even walkers, but that did not in any way dim the enthusiasm.

In addition to the music, food, and fun, participants took turns walking or running around the track that rings the football field. Some participants even walked close to the entire six hours because, as they put it: cancer never sleeps. 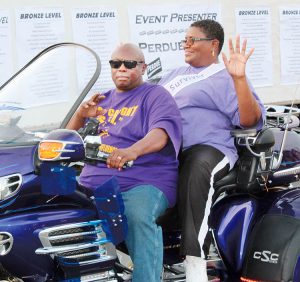 Some of the cancer survivors were given the opportunity to enjoy a motorcycle ride during the traditional opening lap of the annual event.

“As of Monday we’ve raised over $169,034.46 said Funds Chairman Bobbie Parker. “Of course, not all our corporate partners have reported so we expect to have more to report before the end of the fiscal year which ends August 31. With all we hope to raise, Bertie should reach or exceed our goal of $213,000 gross with a net goal of $200,000 when all sources have reported in helping make a difference in the fight against cancer.”

The speaker for this year’s event was Heritage Collegiate Leadership Academy founder and director Dr. Kashie Bazemore Hall, who related how this killer we all want to eradicate has affected her life. She began by asking anyone affected by cancer to raise their hands.

“My hand is up with yours,” she acknowledged. “Cancer first came in my life as a child when my grandmother was diagnosed and I completely thought she was going to be just fine.”

Hall said her child’s naiveté was overcome as her grandmother’s disease progressed, sadly, to her passing.

“It was one of the most difficult experiences of my life,” she noted. “Today I’m here to share a message of hope.”

Hall recalled the 2016 Bertie Relay for Life theme of Hope Lives Here’ and said it could be used again in guiding what she wanted to impart to the gathering.

She recounted in 2016 when a college friend and education colleague who fought colon cancer.

“My mind went to, ‘My friend is going to die’,” Hall said. “But let me tell you in a year’s time she underwent experimental treatment and she had a lot of people praying for her. Today she is cancer-free, and that is what hope is all about.”

The speaker cited several examples of others in her life who’d fought the fight – some battles won, and sorrowfully others lost.

“Tonight there’s every reason we could be sad,” she stated. “Instead of being broken and rejected, losing (loved ones) gave me a new lease on life, and I will walk in their honor because they represent a legacy that will continue.”

Longtime Bertie Relay for Life chairman Artie Johnson passed away in 2015, but his other committee members picked up the fight; and they also chose a unique way to remember their former chair with the Artie Johnson “Spirit of Relay Award”. In 2017 the honor goes to Melinda Eure.

Bertie Early College High School and Conoconary Baptist Church were second and third in team theme. BCECHS used “Going for the Gold”, while the church’s theme was “Cooking up a Cure.”

The most survivors recruited by any one team and winner of the Willie Bazemore Pack the Track Award were the Friends of Relay who recruited 41 survivors.

The most laps walked by a team went to Friends of Relay who completed 244 laps. Cathy Pierce had the most by an individual and she finished the fight by walking 60 laps. 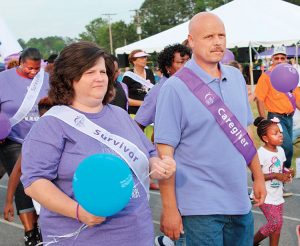 Cancer survivors and their caregivers share the track at the old Bertie High School on Friday.

The Beth Clayton Light Up the Night Award for most luminaries sold by a team also went to Friends of Relay who raised $2,018.

Perdue Farms of Lewiston easily outdistanced their corporate contributing rivals with pledges totaling nearly $105,911.27 as the top fund-raising team, while the Friends of Relay was second with $12,335.01and the Town of Aulander was third. The top fund-raising individual was Joann Joyner.

Finally, there were even prizes for the youngsters with Paisley Copeland claiming Little Miss Relay, and Little Mr. Relay went to R.J. Little, with Carly Piland as Little Princess Relay.