MURFREESBORO – A local man with a long and illustrious military career will serve as the guest speaker at the annual Memorial Day ceremony in Murfreesboro.

Sergeant Major (SGM) Michael Jerome Eason, a native of Woodland, will deliver remarks at the event, scheduled for 11 a.m. on Monday, May 29 at the Murfreesboro Municipal Building, located on Broad Street.

The event is open to the public. Afterwards, a display featuring World War II memorabilia will be unveiled across the street at the Murfree Center. 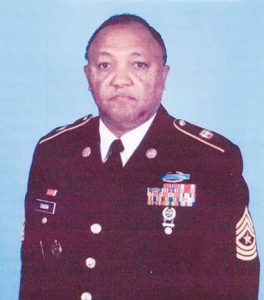 Sergeant Major (retired) Michael Jerome Eason will be the featured speaker at a Memorial Day ceremony on May 29 in Murfreesboro.

Since then, SGM Eason has held positions of greater responsibility such as Squad Leader, Drill Sergeant, Senior Drill Sergeant, Instructor, Master Sergeant, First Sergeant, and now Sergeant Major (SGM). He has instructed Advanced Leadership courses to include the Advanced Non-Commissioned Officers Course, the First Sergeants’ Course, and the Battle Staff Course to numerous Soldiers in the military.

SGM Eason’s last duty assignment was as the Chief Operations Sergeant Major for the 207th Digital Liaison Detachment, Fort Bragg, NC. He was the Senior Enlisted Advisor to the Commander and provided input on Soldier readiness and the unit’s overall health and morale. He planned, coordinated and supervised all activities that support the unit’s mission.

In 2006 through 2008, SGM Eason distinguished himself by exceptional meritorious service to the United States as the 2nd National Police Division Transition Team Non-Commissioned Officer-In-Charge (NCOIC) in support of Operation Iraqi Freedom (OIF). SGM Eason commanded 300 Soldiers while conducting over 250 combat patrol missions during his 18 months tour of duty in some of Iraq’s most violent areas.

SGM Eason has over 41 years of honorable military service. His military accomplishments include: The Legion of Merit Medal (LOM), The Bronze Star Medal (BSM), the Meritorious Service Medal (MSM), the Army Commendation Medal (ARCOM), the Army Achievement Medal (ARCAM), the Combat Infantry Badge (CIB), the Drill Sergeant of the Year Award, and various Letters of Commendations.

He currently lives in Clinton, MD with his wife, Phyllis.