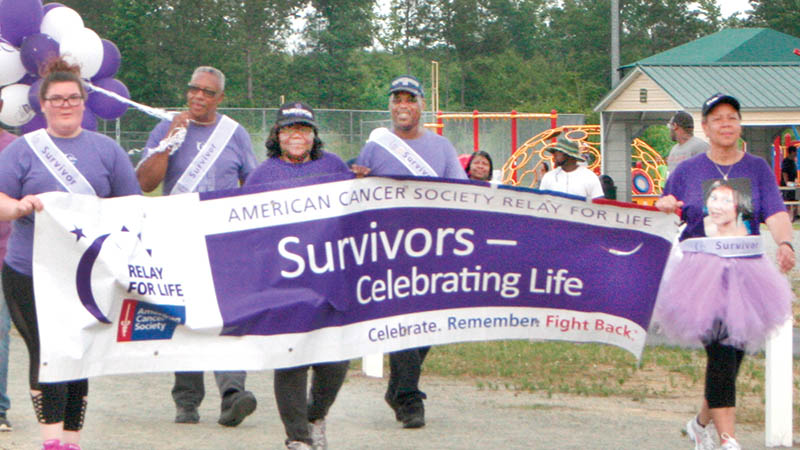 Those who have battled cancer and survived had the honor of walking the first lap at the sixth annual Northampton County Relay for Life held this past weekend in Jackson. | Staff Photos by Holly Taylor

JACKSON – The walking trail at the Cultural and Wellness Center in Jackson isn’t the typical circle you’d envision for a track. From start to finish, it makes a complete half mile loop, but it takes a few twists and turns along the way to get there.

Just like how life sometimes takes an unexpected twist or turn with a cancer diagnosis. 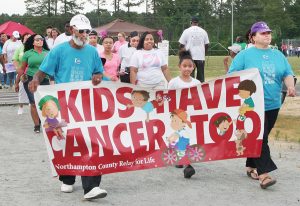 As indicated by this banner, cancer shows no boundaries when it comes to age groups.

A multitude of people gathered together for Northampton County’s sixth annual Relay for Life event to walk the track in the name of cancer research. Survivors, caregivers, and supporters came out beginning on Friday afternoon, May 19 for the fundraiser whose theme this year was “Carnival for a Cure: Step Right Up and Knock Cancer Out.”

“We’re fighting for each birthday,” said Rev. Dr. George Jerman as he addressed the crowd with encouraging words during the opening ceremony. “We must not quit. Together we can do it.”

Rev. Jerman emphasized the importance of lifting up and embracing each other as the fight for a cancer cure continues.

His sentiments of support were echoed by many others attending the event.

Branch was at the event raising research money with her team called “Won’t He Do It!” by selling t-shirts. The group is made up of people from local churches, CADA, and students from CADA’s youth program: Workforce Innovation Opportunity Act. She said that last year was the only time they weren’t able to make it to Relay. 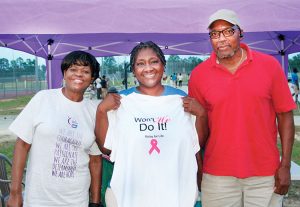 Phyllis Branch (center) is flanked by supporters as they all took part in the 2017 Northampton Relay for Life. Branch served as a caregiver while her brother battled cancer.

“It’s hard to be a caregiver,” Branch shared of her own personal experience losing a brother to cancer. “Family is everything.”

Dwight Ricks, one of the volunteers helping out with the event, spoke of why it’s important to him to support Relay for Life.

“Everyone’s been tested by cancer,” he said, adding that people need all the support they can get to make it through the difficult times.

Ricks himself is a cancer survivor, acknowledging that his case was a simple one solved by surgery while other people are out fighting for their lives.

“They need all the help we can give and support,” Ricks said.

Despite the devastating impact of the deadly disease, the Relay event put the focus on hope instead. Words of encouragement could be found everywhere, from the “Wall of Hope” people signed by the tennis courts to the lyrics of “God Provides” sung by Margaret Powell during the opening ceremony.

“Close your eyes, there’s no more need to fight, watch God provide,” were the last lines of the song Powell sang.

Amidst the tents set up all around and the people walking the track, there was always some sort of entertainment going on. At 7 p.m. on Friday, a “celebration dance with purple gloves” gathered people together to dance for the progress they’ve made so far and to look forward to making a bigger impact in the future. Several local groups provided song and dance as the night continued, and Timeless Band performed later into the night.

On Saturday morning, the ‘Unifying for Change’ Motorcycle Ride and Car Show provided another fun opportunity for people to participate in an additional fundraiser for the cause. Over 50 participants signed up to either display their classic cars on the grounds or ride their motorcycles throughout the county. This was the second year that the event was held at Relay for Life.

Over in the Survivor’s Tent on Friday night, a rousing game of Bingo was going on sponsored by the local chapter of the Alpha Kappa Alpha service sorority. Young ladies from the AKA youth groups “Ascend” and “Budding Roses” called out the bingo numbers as participants hoped for a chance to win prizes.

Bessie Piggott and Carol Williams were two AKA members present who helped mentor the young ladies.

“Service to all mankind,” is the motto for the country’s oldest African-American sorority, explained Piggott.

Williams added that their group takes part in as many service projects as possible, including Relay for Life every year. One of their service targets is to promote healthy living.

Marla Jerman, another member of AKA, explained they bring the youth to service events like this to give them the opportunity to understand what cancer is all about and to learn how to be caregivers themselves.

The most emotional part of the night was the luminaria ceremony at 9 p.m. In complete darkness, 12 luminary bags were lit one by one to represent each month of the year and to honor the memory of loved ones lost.

The 2017 Survivor of the Year and Caregiver of the Year both addressed the crowd lit only by the glow of the luminaries to tell the story of their experiences. They emphasized the importance of faith, perseverance, and making memories during their ordeals with cancer.

Walking around the track at the county’s Wellness Center would certainly be a memorable experience for all involved in the Relay for Life event. Laps around the track marked both the beginning and the end of the two-day fundraiser. Encouraging music such as “Survivor” by Destiny’s Child, “How Sweet it is to be Loved by You” by James Taylor, and “Happy” by Pharrell Williams played in the background over the speakers.

The participants walked around each twist and turn of the track to signify their never-ending commitment to finding a cure for cancer.