AHOSKIE – A late inning error proved to be disaster for Ahoskie Post 102’s junior American Legion baseball team here Thursday night.  The Albemarle Wildcats used the miscue to their advantage and beat the Braves 7-6, spoiling their home opener before a large and raucous crowd.

Post 84 opened the game with a pair of runs in the top of the first inning, but Ahoskie answered back with three runs in their half of the first.  Evan Lassiter walked and went to third on a Spencer Simonowich double down the right field line.  Lassiter would score on an error on that same play to cut the Braves’ deficit to 2-1.  Simonowich crossed the plate one batter later when Ethan Hughson doubled into the gap for an RBI to tie it.  Pinch-runner Jordan Robinson then scored the go-ahead run as Edward Bradley reached second on an error.  It was 3-2, Post 102, after one full inning of baseball.

Ahoskie added three more runs in the bottom of the second as Trent Munford, Ryan Rowe, and Trevor Lee all walked to load the 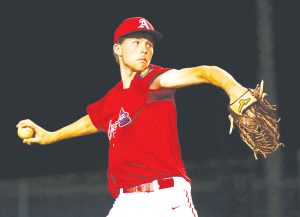 bases.  Lassiter then blasted a two-run single to left that scored Munford and Rowe.  Later Lee and Lassiter moved into scoring position on a wild pitch and Lee would score the sixth run for Ahoskie on a Simonowich sacrifice fly.  The Braves were ahead now 6-2 after two innings.

Albemarle cut their deficit in half with a run in the top of the third, but still trailed Ahoskie, 6-3.

After a scoreless fourth, the Wildcats scored three runs in the top of the fifth inning and tied the contest at 6-6.

In the bottom of the fifth with two out, Simonowich walked, Hunter Mitchell was hit by a pitch, and Jordan Robinson walked, to load the bases. But the ‘Cats coaxed a strikeout and it remained 6-all after five.

In the bottom of the sixth Rowe singled with two out and Lassiter singled.  Simonowich ripped a shot to left field for a base hit, but Rowe was thrown out at home plate trying to score the go-ahead run and the contest remained deadlocked.

The winning run would come across for Albemarle in the top of the seventh on a throwing error with two out.

In the bottom of the frame Edward Bradley reached on an error with one out.  But he was left stranded as a strikeout and a pop-up ended Ahoskie’s chance at a comeback, and the Wildcats head back to Elizabeth City with a one-run, 7-6, victory.

Ahoskie had six hits.  Lassiter and Simonowich had two hits each while Hughson and Rowe had one hit each.

Hughson started on the mound and went four innings for Post 102 allowing three runs.  Sam Doughtie faced two batters and allowed two runs while Mitchell would pitch the final three innings, allowing two runs and get tagged with the loss.

Ahoskie starts the junior season at 0-1 and will play at Perquimans on Monday at 7 p.m.  The Braves will next host Edenton at home on Wednesday night at 7.