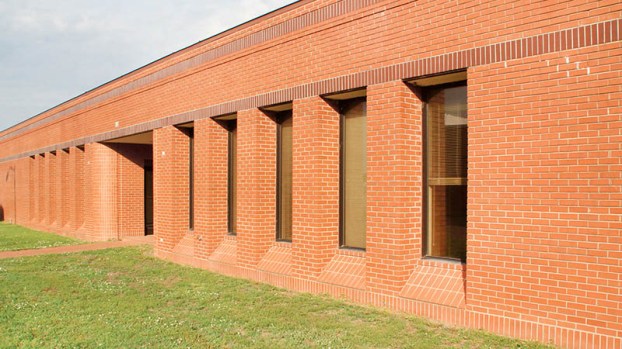 This building, located at 418 Everett Street in Ahoskie and now owned by the county, will be completely gutted on the interior and will become the new home of the Hertford County Board of Elections and the Ahoskie Nutrition Site. | Staff Photo by Cal Bryant

WINTON – Plans are moving forward to renovate a building in Ahoskie, purchased six months ago by Hertford County local government, that will serve as the new location for the county’s Board of Elections office and the Ahoskie Nutrition Site.

The building is actually two separate offices under the same roof. It is located at 418 Everett Street (behind Abrams Barbecue) and is the former office of District Attorney Valerie Asbell.

In November of last year, Hertford County local government purchased the property for $275,000 from Scott Edwards.

Hertford County Manager Loria Williams said since that time, the county’s Elections Director and Office of Aging Director have had the opportunity to walk through the building with the architect to give him their input on how the layout should be.

“Some issues came back to the architect after a drawing was made of that layout and the architect has addressed those issues,” Williams said.

Estimated renovation costs are in excess of $250,000 per suite.

“That existing office space will be gutted and laid out for future use by the Board of Elections office and as the new location of the Ahoskie Nutrition site through the Office of Aging,” Williams said.

The project’s architect has proposed a renovation budget of $574,065. The major costs (an estimated $346,764) will come with new walls, doors, hardware, carpet, paint, flooring, ceilings, plumbing, HVAC and electrical.  The architect’s fee, to include engineering costs, is $51,870.

“We’ll make a determination over actual costs of the project once the bids start to come in,” Williams said. “If they come in too high, then we’ll start all over again.”

One of the positives of relocating the Board of Elections office from Winton to Ahoskie is the added space the building allows. Williams said the Board of Elections, due to extremely limited space at its Winton office, has to store all of its equipment (voting machines, etc.) at an off-site location.

“With this new location, all that equipment can be housed on-site,” she noted. “It will be in a more controlled environment.”

Williams added that the new location is also better suited for one-stop voting.

Finding a new location for the Ahoskie Nutrition site has been discussed for over one year. It is currently housed at the cafeteria of the old R.L. Vann School on Holloman Avenue. A leaking roof has caused multiple problems there for years and the commissioners finally agreed that a new location would be cheaper in the long run compared to replacing the roof and making other repairs caused by water damage at the current site.

The commissioners voted, without objection, to approve moving forward with the renovation project at the building on Everett Street.