(Editor’s Note: This story first appeared May 1 at www.thechattanoogan.com)

NASHVILLE, TN – Nita Shumaker, MD, has taken the reins as president of the Tennessee Medical Association, the state’s largest professional organization for doctors. Her one-year term officially began in Nashville during the annual meeting of the TMA House of Delegates.

Dr. Shumaker is the second female to hold the position. Dr. Phyllis Miller, also of Chattanooga, served as TMA president from 2005-2006.

She is a native of Hertford County and attended school in Murfreesboro.

As president, Dr. Shumaker will serve as the public spokesperson and official representative for TMA’s more than 9,000 members. She will also hold a seat on the TMA Board of Trustees.

“Anyone who knows me understands my passion for organized medicine and healthcare in Tennessee,” said Dr. Shumaker.  “I’ve been involved in local, state and national grassroots organizations for nearly 20 years as a fierce advocate for doctors and other healthcare 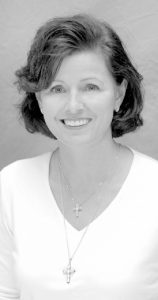 Dr. Nita Shumaker, a native of Winton, was recently appointed to serve a one-year term as president of the Tennessee Medical Association.

providers, particularly when it comes to children’s health. We have so many challenges and opportunities, including public health epidemics, overly burdensome regulations, and defining and protecting the scope of practice in medicine. I look forward to continuing to serve my colleagues and patients during the coming year in this new capacity.”

Dr. Shumaker served as a pediatrician in the U.S. Air Force from 1990-1994 while she completed her residency training. She went on to serve two years as a pediatrician at March Air Force Base in Southern California and in 1994 was awarded an Air Force Commendation for Meritorious Service. She has been in private practice with Galen Medical Group, a large, multispecialty practice in Chattanooga, since 1997. Dr. Shumaker has held multiple leadership positions with Galen and currently is a member of the Board of Directors.

Between 1998-2010, Dr. Shumaker served continuously in significant medical staff positions and other leadership roles in Chattanooga’s Erlanger Health System, including chief of pediatrics at T.C. Thompson Children’s Hospital and secretary, vice chief, chief of staff and past chief of staff at Erlanger Medical System. She was elected to the Erlanger Hospital Authority Board of Trustees, serving from 2011-2015, and served on the board of directors of the Southside/Dodson Avenue Community Health Centers from 2011-2015.

She also served as secretary-treasurer and president (2010) of the Chattanooga & Hamilton County Medical Society, and has been an active leader within TMA, serving on numerous committees and task forces and on the TMA Board of Trustees (2013-2016).

Dr. Shumaker earned a bachelor’s degree and completed medical school at East Carolina University. She completed both her internship and residency at the Medical College of Georgia. She and her husband, Kevin, are the proud parents of two sons. One is a PhD candidate at Rutgers, while the other is following in her footsteps, currently studying at East Tennessee State University Quillen College of Medicine.

Dr. Shumaker is the 163rd president of the TMA. She succeeds Keith G. Anderson, MD, a cardiologist in Memphis.