The mission of the Cadet Staff Ride was to teach Cadets about the foundation of the American Government and International Governance through the United Nations in hopes to increase their knowledge and awareness of their rights as a citizen and relates the Staff Ride to classroom program instructions.

Those participating in this tour acquired a good understanding of the basic foundation of the US Government and International Government (United Nations) and an appreciation for the citizenship rights guaranteed to them by way of the US Constitution and the US Military, which provide protection and security for the freedom of democracy. All cadets were given individual assignments and required to prepare PowerPoint presentations to present in class prior to departure. 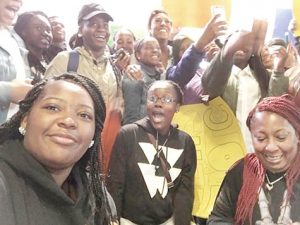 The cadets visited Manhattan, New York, the United Nations (detailed tour), and visiting the set of Good Morning America (GMA), which included a detailed view of workings of the show and photos with GMA co-hosts Robin Roberts and Michael Strahan.

That was followed by a ride to Battery Park to catch the ferry to Liberty Island for the Statue of Liberty with briefings by cadets followed by lunch.

Cadets then moved to 9-11 Ground Zero for tour and pictures before proceeding to Rockefeller Plaza and the Wall Street financial district.

That evening concluded with a dinner meal and a chance to see Time Square in the hours of darkness.

While in Washington, cadets had the opportunity to visit Fort Myers and were given a chance to wind down with an evening of bowling and free pizza. Tours in Washington included parts of the National Mall, which consisted the Korean War Memorial, FDR Memorial, Lincoln Memorial, Washington Monument, and Vietnam Memorial, Martin L. King Memorial, Arlington Cemetery, Tomb of the Unknown Soldier, Reef Laying ceremony by North Edgecombe HS Cadets, Jefferson Memorial, WWII Memorial, and the gravesite of former President JFK.

Cadets were assigned memorial sites and were required to give briefings to the group.

On Easter Sunday, the  Cadets were given the opportunity to have fun playing sports activities (dodge ball, touch football, and softball).

Upon return to North Edgecombe High School, an out brief was conducted by Cadre (Major Davis, Major White, SFC Moore, SFC Gordon) and chaperones (Coach Sharpe, Beshelya Smith) who give their words of wisdom to Cadets about their five day learning experience which should be cherished and shared with students back at their home schools and most especially their parents.

During this excursion everyone was able to capture photos at all sites for archives purposes. Coach Sharp and Ms. Smith captured more than 1,500 photos over the entire trip.