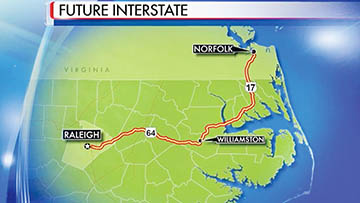 WINDSOR – It may or may not seem like it to the motorists who navigate US 17 north and south from state line border-to-border, but both Uncle Sam and the state are looking to make that run smoother.

That was the word from Marc Finlayson, a New Bern-based consultant who serves as Executive Director of the US-17/64 Highway Association Project.

Finlayson says the association has spent 11 years advocating good roads that help create jobs, aid the military and tourism, enhance the quality of life, and increase property taxes and sales taxes for the corridor leading from Virginia to South Carolina. The Highway 17 Association is also considered the leading advocacy organization for most all eastern North Carolina roads.

At the May 1 meeting of the Bertie County Commissioners, Finlayson was present to update the Board on the latest efforts for the Highway 17 project.

“We know of this road as ‘the Ocean Highway’,” Finlayson began. “Bertie County has joined many of the other counties along this corridor in supporting us since 2006.”

Finlayson stated that $1.9 billion has been invested in 19 various Highway 17 projects.

“We’ve had quite an impact,” he noted. “When we started in 2006 we were given a three-year mandate, and now we’re in our 11th year of persuading DOT to invest in our projects.”

Finlayson said one of those projects is the US 17 By-pass around Windsor.

“It’s hard to believe it’s been open now since 2008, but that’s a great stretch of road, and much needed and we’re glad we were a part of that,” he said.

Finlayson said the Raleigh-to-Norfolk Interstate (I-87) has caused those along US-64 to partner with the Association.

“We reached out to Nash and Edgecombe counties and some of the municipalities along that route and encouraged them to join our ranks,” he acknowledged. “By broadening our network we added all four eastern North Carolina highway divisions, another congressional district, and half-dozen (General Assembly) districts, so our political footprint is bigger giving us more influence in Raleigh and Washington,” and he thanked US Senators Burr, Tillis, and former Governor Pat McCrory, for this investment.

“The entire delegation, Democrats and Republicans, House and Senate, all got together to make this possible, and we are grateful,” he said.

Finlayson said the Interstate project is very much within the Association’s goal, which was the improvement of US-17.

Interstate 87, when completed, will run from Williamston to Hampton Roads along US-17.

Commissioner Tammy Lee said some commissioners from other counties are concerned about the start of the project.

“The Camden and Pasquotank folks have been very vocal about the money it will take for the upgrade,��� Finlayson responded. “You have to have four-lanes, no access at grade, wider shoulders, all the safety warrants, wider medians, longer ramps, and crash barriers. All that’s required and it’s costly. But their theory is that they already have a high quality road, so it shouldn’t cost that much more money to upgrade it; and by then we’ll be able to encourage industrial development primarily supporting the port at Norfolk.”

Finlayson said despite the federal government authorizing the upgrade to interstate level, they aren’t providing any more funding to build it.

Commissioner Stewart White wanted to know how much traffic deaths had decreased due to Association improvements.

“I don’t know the precise numbers, but the improvement has been impressive, so we’ve saved a lot of lives,” he stated. ”But that’s not to say there still aren’t people dying out there on those two-lane stretches.”

Finlayson said the two-lane stretches are Williamston to Washington, Chocowinity to the Neuse River in New Bern, and Jacksonville to New Bern.

“There’re still people dying because there’s no margin for error,” he noted. “You’ve got school buses, farm equipment, trucks, and impatient drivers trying to pass them and that’s a bad combination.”

Finlayson said there is a 10-year long range transportation project for the entire state and 17 of those projects could begin within the first five years, including six US-64 projects.

“It depends on you, the elected officials to make this work,” he challenged. “It’s taken some years to get our projects prioritized; we’re still behind the eight-ball, but we’re trying.  We can’t compete with Charlotte and Raleigh when it comes to congestion relief, but as long as that’s the data, then that’s where the money is going to flow.”

“I’ve had conversations in Washington with Homeland Security and they say there’s nothing they can do about Hurricane Evacuation funds for US-17,” Finlayson said. “If you can’t get people away from the coast during hurricanes then you’ve got big problems.”

Commissioner Ron Wesson asked about how the county’s “Tall Drink of Water” project of future development of Albemarle Sound-front property for recreational purposes and asked if there was a chance to factor in an interchange for access to the area – a public rest stop.

“I think you should make a request because you have to make that known,” Finlayson answered.

Finlayson closed with praise and hope for newly named Secretary of Transportation Jim Trogdon, III as well as new members of the state’s Board of Transportation.  He also said the four-lane of US-17 from Washington to Williamston has been fully funded with construction beginning in 2020 for completion in 2022.

“This will mean US-17 north of Washington all the way to Virginia will be four-lane, and that’s a big step in the right direction,” he acknowledged.

Vice Chairman Ernestine Bazemore encouraged Finlayson to not forget turn lanes and welcome signs for Bertie County along the two US highways, and especially at the county’s water front access on the Sound.

“Tell them to please don’t pass us by,” she implored, to laughter from the assembly.

The Commissioners thanked Finlayson for his presentation, and requested that he return sometime in the near future with any new updates.

WINDSOR – Getting their request in just under the wire, Bertie County Schools will be receiving $100,000 of Capital Outlay... read more