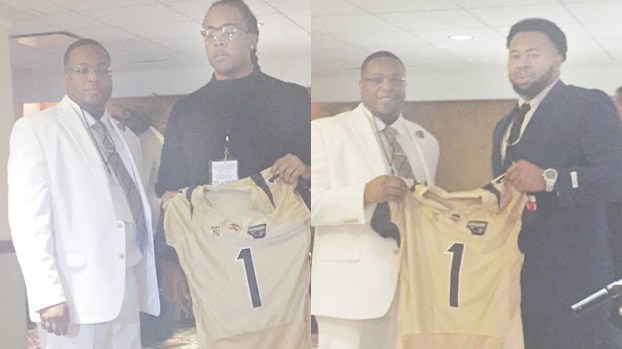 Now, a journey that began there and routed its way through middle school, Bertie High School and later Shaw University, has at last become a reality.

The players and lifelong friends were taken in successive rounds of the Rivals Professional Football League (RPFL) draft last winter in Detroit.

They will head to Michigan next month and play their first pro games sometime in July.

“It’s a development league for the NFL, the Canadian Football League, or the Arena Football League” said Lee. “There are two (RPFL) leagues, one in Florida and ours in Detroit.”

Both players tried out at the RPFL Combine held in Florida in August 2016, and they both succeeded in attracting the attention of scouts.

This league is fronted by CEO and President Quentin Hines, a former draft pick of the Super Bowl champions, New England Patriots.

“The RPFL is a professional football league that provides adult football players an opportunity to gain more experience while attaining great quality game film that can be used to market them to the NFL and CFL,” said Hines.

The RPFL will compete for eight weeks during the 2017 season from May to July. The RPFL currently has four teams in the state of Michigan and South Florida and adding four more teams for the 2018 season. The top two teams will then move on to compete in a televised League championship game after the regular season. All players will sign a four-year $256,800 performance based incentive contract with a possibility of guaranteed money in the form of a base salary, signing bonus and or roster bonus. Players drafted in the first round of the 2017 RPFL Draft are guaranteed a signing bonus of up to $1,000.

Both players enrolled in CIAA-member Shaw in 2014 after playing at Bertie for both Greg Watford and Will Harrell. Lee played defensive end and some linebacker while White played on both the left and right sides of the offensive line. Before their college careers could get off the ground, both suffered injuries, however, and never made it into a college game. Lee entertained the idea of transferring to Norfolk State to continue his playing career or to transfer closer to home and continue his education at Pitt Community College.

“I had seen an ad for, and a friend also recommended me to, the RPFL,” said Lee. “They had a $200 tryout all across the country. One of their stops was in Raleigh so I figured, why not.”

Lee was joined by White and Jalen Simmons – who later made the Carolina Panthers practice squad. Meanwhile, Lee and White received letters from coaches who liked what they saw, and the pair went into the RPFL draft pool.

“We went to the draft in Detroit in February,” Lee continues. “Out of 480 people there, I got drafted in the twelfth round, and Cameron was taken in the seventh. It was the same team, the Detroit Cougars.”

“It was a different experience,” said White. “With six rounds left to go, I didn’t think I’d be drafted as high as I was.”

In the meantime, the two returned home and took on regular jobs. Cameron opted to work at McDonald’s so he would have more time for working out, while Lee found work at Bertie Correctional in Windsor.

“Getting drafted together, playing for the same team together, this means we can find a place to live together while we’re in Michigan,” said Lewiston-native Lee.

White, who hails from Windsor, works out at the Ahoskie Rec. Center nearer to his job, and also runs the track at his high school alma mater, Bertie High.

“Our training camp and home games will be played in Pontiac, Michigan and they say they plan to put us through a NFL-type workout,“ said White. “It’s too hot in Florida this time of year, but it’s also not snowing in Michigan, mostly just a lot of rain.”

In addition to the Cougars, other teams in the Michigan quartet include: the Michigan Bearcats, the Oakland County Pacers, and the Pontiac Generals. All will play within the greater Detroit area. Games are every weekend, two games involving all four teams at one site.

Lee says while his ultimate dream is to make it to the NFL, he realizes it’s going to be a grueling climb.

“I’ve got to crawl before I walk,” he mused. “I’ll accept (the RPFL) if it helps me move up to the next level. I’m looking past Arena League to either NFL or Canada.”

Currently, the pair is agent-less, but hopes they can attract a representative with their play on the field.

“I’m happy for the friends and family that motivate me and support me,” said Lee. “I don’t want to let them down.”

“Everything takes its course,” echoed White. “And this is what it takes to make it.”