WISE, VA – Chowan University saw its hopes of advancing to the NCAA Division-II Atlantic Regional dashed when it suffered a pair of heartbreaking losses last weekend. 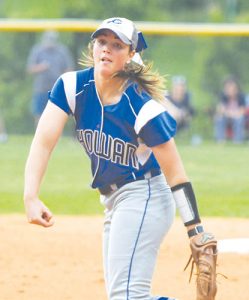 Kayla Robins threw two complete softball games for Chowan University in the NCAA Atlantic Regionals in Wise, VA last weekend, but it wasn’t enough as the Lady Hawks were eliminated thanks to a pair of 2-1 losses. | Photo by Richard Meade

Thursday, the eighth-seeded Hawks fell to top-seed West Chester University 2-1, dropping them into the loser’s bracket. They then had a one-day weather delay before taking on host-school UVA-Wise, but they couldn’t pull out a win, and suffered a second loss by a similar 2-1 score.

CIAA Pitcher of the Year Kayla Robins took the tough luck loss in the circle in both games, allowing two runs off eight hits in the Thursday loss to the Golden Rams as she struck out six batters in six innings of work.

Saturday, Robins allowed two runs (one earned) off three hits and struck out nine, but still failed to get the win.

Thursday, West Chester posted the first two runs on the board in the bottom of the third as the Golden Rams singled to start the inning and capped it off with a two-run home run with two outs. In the seventh inning, Emily Stafford cut the deficit in half for the Hawks when she singled in Kris Neal, but was caught in a rundown between third base and home plate to end the game.

In the elimination game, Haley Cooper led the charge at the plate going 3-for-4.  CIAA Rookie of the Year Brittany Parson hit the program’s first ever postseason home run with a solo shot in the fourth.  Parson went 2-for-3 at the plate.

Chowan was able to start the elimination game by picking up a hit by Cooper in the first inning with two outs but was unable to produce with a groundout to end the inning.

UVA-Wise posted the first run of the contest in the bottom of the first inning with a two-out RBI single.

The Hawks looked to respond in the top of the second putting two runners on with no outs.  Tina White led off the inning reaching base via an error at shortstop. Parson moved White into scoring position with a single to right field, but the Cavs struck out the next three batters to thwart the rally.

Chowan made some noise in the top of the third picking up hits by Katrina Simmons and Cooper but UVA-Wise turned the Hawks away again without a run.

On the first pitch of the fourth inning, Parson tied up the contest with a solo blast to right field.  Kris Neal would keep the inning going in the next at-bat with an eight pitch walk.  Neal moved up sixty feet to second after tagging up on Shannon Buchanan’s fly ball. Neal would be stranded in scoring position as the Cavs ended the threat with a pop-up.

UVA-Wise regained the lead in the bottom of the fourth by bringing in a run home on an infield single to regain the lead, 2-1.  The Cavs would later load the bases in the inning but Robins induced a pop-up to halt the threat.

Cooper picked up her third hit of the contest with a single in the fifth.  Brook Bowen reached on a hit-by-pitch in the top of the seventh but the Hawks were unable to muster a rally as the Cavs held off the Hawks for the 2-1 victory.

In addition to Cooper and Parson, Simmons picked up a hit, while Bowen and Neal reached base via the hit-by-pitch and walk respectively.

Chowan ends its season with a 36-20 record and a NCAA Atlantic Regional Tournament appearance.

Robins and Parson were named to the All-Atlantic Region first and second teams, respectively. Robins finished her career posting a 53-20 record with a 1.74 ERA in 471.1 innings, striking out 680 batters including 367 punch outs this season.  Parson led the team with doubles (12), home runs (11), RBI (54), along with her .349 batting average.