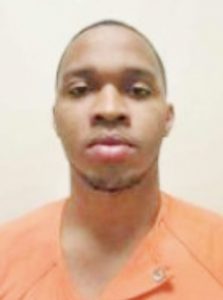 At that time, Task Force agents were able to seize a large amount of heroin, powder cocaine, crack cocaine, firearms and U.S. currency. Those agents are part of a crime-fighting unit organized late last year that consists of officers with the Bertie, Hertford and Northampton County Sheriff’s offices as well as the Ahoskie Police Department.

Flood was transported to the Northampton County Sheriff’s Office for processing. There he was formally charged with trafficking heroin, trafficking cocaine, and four counts of felony maintaining a vehicle for the purpose of storing a controlled substance.

He was jailed under a $525,000 secured bond. Northampton County Sheriff Jack Smith said Flood made bail on Saturday.

Flood is scheduled to make his initial appearance on Thursday in Northampton County District Court.

Sheriff Smith, during a press conference held Tuesday afternoon in Jackson, stopped short of referencing Flood as a “kingpin” in the illegal drug trade. However, Smith did say that Flood is a “high-level dealer.”

“This is a lot of drugs, especially in a community the size of Rich Square or in a county with a low population such as Northampton,” Smith stressed. “With that amount of drugs, he’s probably been in business for a while.”

Smith said Flood and his drug trafficking had been under investigation for the last 10 months.

“It took a lot of time and effort for our Task Force to pull off an operation like this one,” Smith remarked. “We owe our Task Force a great deal of thanks for their hard work and dedication in doing their jobs. Thanks to them, these drugs will never get into the hands of our children.

‘We feel with that type of drug (volume) he may have had other people involved,” Smith added. “This investigation is only two to three days old (since the arrest); we’re still looking into this and there may be more arrests.”

Smith observed that drug dealers do not recognize county lines.

“They move from here (Northampton) to Hertford, to Bertie, to Halifax and Martin (counties) and on up into Virginia to operate their business and make their money,” he pointed out.”

Due to the wide operating range of illegal drug dealers, Smith said it was important to have community involvement to slow down their activities, hopefully to the point where they’re arrested and behind bars.

“We all share the same problems with drugs; we put our heads together and formed this task force to combat the drug epidemic.”

“We formed this Task Force for the reason that drug dealers have no boundaries,” said Sheriff Hayes. “This Task Force was formed for information sharing. My office may be investigating a subject that Northampton is also looking at; we share that information and that teamwork leads to arrests.

“These guys (Down East Drug Task Force) are working long hours and I’m proud of their efforts,” Hayes added.

Hayes said the opioid epidemic is, in his opinion, skyrocketing due to heroin being inexpensive to purchase.

“We have so many people addicted to prescription drugs, those costs are so high where they can’t afford them anymore, so they turn to heroin, which is cheap,” he noted.

“For one time I can truly stand here and say that I feel that we’re actually winning on the street in this drug war,” said Sheriff Holley. “This Task Force is working around the clock, and I’m proud of what they’re doing. These guys are one ‘bad’ organization and they proved that with this last arrest.”

“I commend our Task Force for the hours they spend away from their families; we appreciate you,” stated Chief Fitzhugh. “This is a combined effort and we will look into each and every drug complaint. They take their job seriously and they work well together.”

“It takes a special calling for the men or women who do this job (drug task force members) day in and day out,” Sheriff Smith stated as he closed out the press briefing. “We’re dealing with people with big guns, a lot of money, a lot of bullets and a lot of dope. I thank all law enforcement officers for the job they do.” 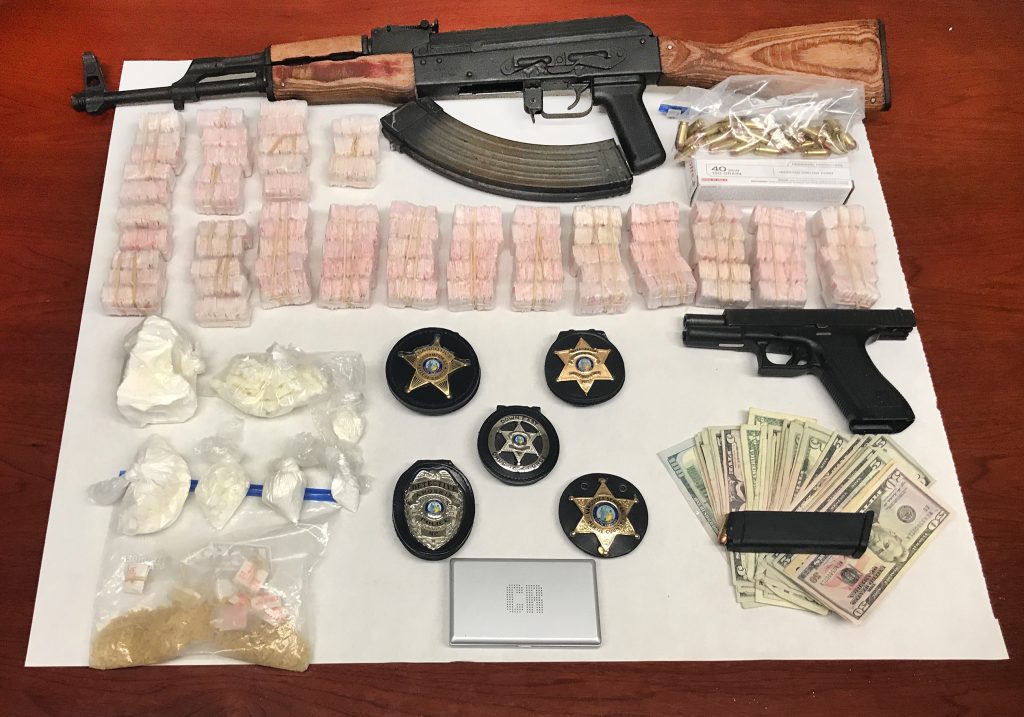 Shown here, along with the badges of the numerous local law enforcement agencies involved in the arrest, are the drugs, weapons and cash seized following the execution of a search warrant at the residence of a Rich Square man.