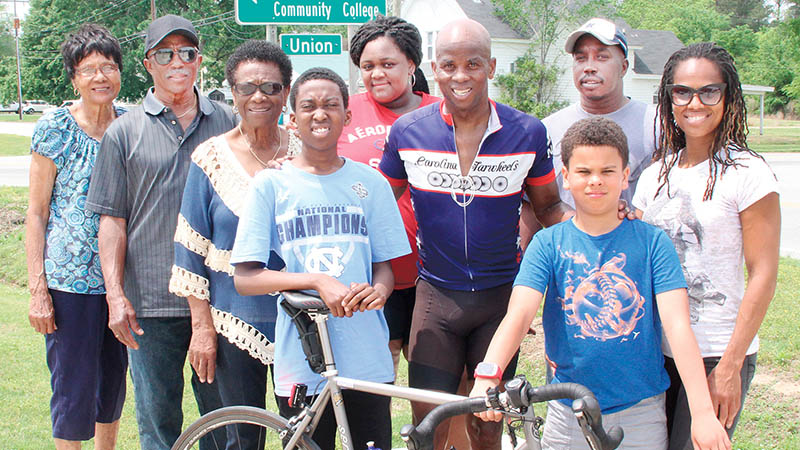 UNION – With age comes wisdom….perhaps that will carry a Hertford County native to the top of the heap, literally and physically.

On May 15, James “Boozie” Whitaker will be among thousands of bicyclists to begin the annual Assault on Mount Mitchell…..a grueling test of endurance that covers 102.7 miles on two wheels.

The group will embark from the parking lot of Memorial Auditorium in Spartanburg, SC. The finish line is positioned at the top of Mt. Mitchell State Park, a 6,684-foot climb.

For Whitaker, a native of the Union community in Hertford County, this marks his 29th year of participating in the “Assault.”

“I know I’m not getting any younger,” said the now 55-year-old,” “but I keep myself in great shape.”

To prove his point, Whitaker departed his current hometown of Durham at 6:30 a.m. on the hot and humid morning of Saturday, April 29. Less than seven hours and more than 140 miles later, he completed his tune-up at the home of his parents in Union. That elapsed time included a brief break in Roanoke Rapids where several members of his family met him and accompanied James on his final leg to Hertford County. 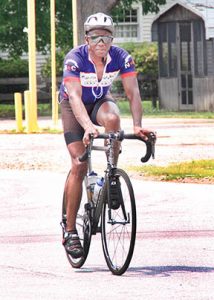 James Whitaker peddles the final hundred-or-so yards to his parent’s home in Union after biking 140 miles in less than seven hours as part of his training for the “Assault on Mt. Mitchell” that begins next week.

“I made pretty good time,” smiled Whitaker as he stopped in the parking lot of the Union Volunteer Fire Department for an impromptu press conference with this newspaper. “From Roanoke Rapids here, I drafted behind a van driven by my father (William Whitaker). We were able to hit speeds of around 35 mph.”

In previous events, James said he has faired well. His fastest time on the “Assault” is five hours and seven minutes, which represented a top-10 finish.

“I didn’t do as well as I thought I would going into last year’s ride,” he admitted. “I had a lot going on then, to include my daughter’s college graduation two days before the event began. I was mentally off my game last year.”

But there’s always a new year and a new challenge.

“That’s exactly what the Assault on Mt. Mitchell is….it’s a challenge; it’s not a race,” Whitaker stressed. “You’ve got to, of course, be prepared physically, but you’ve got to have your head into this event just as much, or even more.”

Considering the overall distance of the event plus the ultimate test of endurance – a climb of well over one mile on the highest peak east of the Mississippi River – pre-conditioning of the body and mind is critical.

The self-paced ride is along back roads and the Blue Ridge Parkway to the summit of Mt. Mitchell. It is popular among hardcore biking enthusiasts, to include used as a training ground for members of the U.S. National Team to help prepare them for the Tour de France.

Whitaker grew up in Union, the son of William and Virginia Whitaker. He graduated in 1980 from Ahoskie High School where he competed athletically as a member of the school’s football and track teams. He and his teammates on coach Daryl Allen’s 1979 football team made it to the state championship game.

He continued his education, using his skills in football to land an athletic scholarship to attend North Carolina Central University in Durham. He competed at the collegiate level for three years….taking off the final year due to an injury and to focus on completing the requirements for graduation. He holds a BA degree in Business Management, with a minor in Marketing, from NC Central.

He remained in Durham following graduation, initially working in Fitness Retail management before taking a position at the Duke University Medical Center where he has worked for the past 21 years.