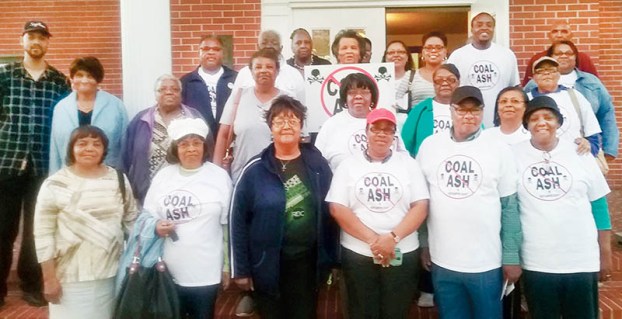 Shown here are some of the Northampton County citizens who attended the NCCACA community meeting on Friday, May 5 at Willow Oak AME church in Rich Square. | Contributed Photo

Retired Judge Alfred Kwasikpui, co-chairperson of the NCCACA, spoke to the purpose of this meeting as being to inform the citizens of Northampton County about the risks and hazards of allowing a coal ash facility to be placed in our county.

Debbie Davis, a retired Chemistry teacher of 23 years with a BS in Chemistry and co-chairperson of the NCCACA, has performed extensive research on coal ash. Debbie spoke about the heavy metals found in coal ash and the effect that these toxic metals would have on the citizens of this county.

An Earthjustice video, “A LINE IN THE SAND”, about a Pennsylvania community that suffered after a coal ash dump site was placed in their community, was viewed. A question and answer session followed with many questions posed and many comments shared by the citizens of the county.

The Northampton County Citizens Against Coal Ash meet every first Friday of the month in different communities throughout the county. The next meeting will be held at 6:30 p.m. on June 2 at a location to be announced. The public is encouraged to attend.

Yes, we can turn lemons into lemonade

By Justin Freeman The Town of Ahoskie has remained relatively unchanged throughout my lifetime. Would you agree with that statement?... read more