Lanny was born in Jackson, North Carolina on July 22, 1942. He grew up on a farm where he excelled in school and athletics earning him the prestigious Morehead Scholar and he graduated from the University of North Carolina in 1964. He was a passionate member of the Alpha Tau Omega fraternity. 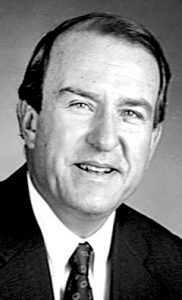 Following his time in Chapel Hill, he spent three years in the United States Marine Corps, where he served as a Captain and Intelligence Officer on the aircraft carrier Enterprise. Lanny returned to school and received his law degree with high honors from the University of North Carolina in 1971.

From 1971 until 2000, Lanny practiced law with King & Spalding in Atlanta, Georgia. Lanny was a sustaining member of the Product Liability Advisory Council, a Fellow in the American College of Trial Lawyers and a Member of the American Board of Trial Advocates. He continued to practice law on a case by case basis with his own private firm until 2009.

After retirement, Lanny traveled the world and continued to be an avid reader of historical books and novels. Lanny loved trivia, talking about current events and politics, his North Carolina Tar Heels, and wanting to know about the past of the people he met throughout his life. He was a long time member of All Saints Episcopal Church in downtown Atlanta.

Lanny will be missed greatly by his family and is now with his Savior, Jesus, in heaven.

In lieu of flowers, memorials may be made in Lanny Bridgers’s name to The Morehead Foundation UNC (The Morehead-Cain Foundation, PO BOX 690, Chapel Hill, NC, 27514) or to the Wesleyan School (5405 Spalding Drive, Peachtree Corners, GA 30092).