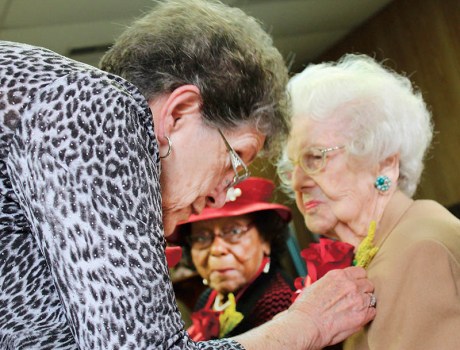 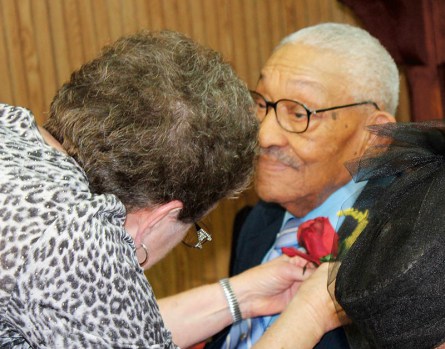 L.T. Askew and Beulah Hoggard were two of the 13 senior citizens recognized by the Town of Powellsville on Saturday. Shown pinning corsages on both honorees is Powellsville Town Clerk Thelma Godwin (left in both photos). | Staff Photos by Gene Motley

POWELLSVILLE – The parade was just the appetizer.

Members of the Powellsville community honored their own here Saturday as part of the town’s 17th annual Community Awareness Day.

In addition to the parade through the town there were also food vendors, kid’s activities, bingo, a car show, and a gospel celebration with song and dance.

But more importantly the town, which was incorporated in 1919, saluted 13 “golden” citizens.

Three of the honorees will turn 100 years old in 2017, while the other 10 are in their nineties.  All were honored in a post-parade service at Town Hall.

“I’m sure our seniors remember all of this,” joked Town Commissioner Carlyle Hoggard, whose 93-year-old mother, Beulah, was one of those saluted.

“We had two of the largest schools (C.G. White and Powellsville High) in Bertie County, our churches, and our businesses, where you could buy anything from a bar of soap to horseshoes. We even had a steam locomotive operated by Carolina Southern.  We have a proud heritage, and even though we’re a small community, this is our home,” Hoggard said.

Hoggard told the group that Powellsville even had the Bank of Powellsville, but it became one of the casualties of the Great Depression.

“The Raynor General Store also contained our first post office, and there was also Castelloe’s Antiques; and we even had a liquor store,” he mused, to the sound of laughter from the crowd.

The celebration of seniors was the brainchild of Linda Peele, wife of Mayor Pro-tem James Peele.

“I went to the (town) Commissioners and made an appeal that we’d never had any special recognition for the town, so they asked me to put something together,” said Mrs. Peele. “So, I got seniors from uptown and downtown, and we came up with 13 that were from 88-to-98 years old.”

Peele said because of the threat of bad weather, only eight of the 13 were able to be present; but those that attended were pinned with corsages.

Estella Simons, widow of Willie Simons, is a mother, grandmother and great grandmother. A retired mathematics teacher from Bertie County Schools she is very active in her community, church and service organizations. She is 99 years old, still drives, and she will be 100 on June 9.

Dora Perry is a member of New Bethany Baptist Church, retired choir member, mother, grandmother, and great grandmother who loves to watch the soap operas on TV daily. She is 99 and will be 100 in July.

L.T. Askew, a farmer, store owner on Highway 13, trustee and Sunday School teacher at Piney Wood Chapel Baptist Church, and former employee at the News-Herald. He is 99 years old and will be 100 in October.

These three served as honorary Grand Marshalls of the parade.

Beulah Hoggard, mother of Commissioner Carlyle Hoggard, and a grandmother, is 93 years ‘young’.

C.D. Hoggard is a past Town Commissioner of Powellsville. He is 91.

E. Rawls Carter, a retired Chief with the Powellsville Volunteer Fire Department, past Town Commissioner and worked in his father, Pop Carter’s store. He is 90.

Kelly Saunders, a retired deputy of Bertie County Sheriff Office, a farmer, and member of Piney Wood Chapel Baptist Church who says he loves to fish. He will be 90 in December. His wife, Ola T. Saunders, was also honored.

Rosetta White, widow of Willie “Bay” White and mother of one son, loves to sing, and study the Bible. She retired from factory work, is 89 years old, and will be 90 years old this year.

Mamie Raynor, a member of First Baptist Powellsville, retired usher, mother, and grandmother. She loves working in her flower beds; is 89 years old and will be 90 in December.

Ruth Watford, mother of 10, grandmother, great grandmother and widow of J.B. Watford, is a member of Rountree Temple, is a church mother, Sunday school teacher, and describes herself as a caring and loving neighbor.

“Each year it’s a challenge to out-perform yourself,” said the Mayor Pro-tem at the ceremony. “From what I see today you’ve all helped us achieve that.”

Tammy Lee spoke on behalf of the Bertie County Commissioners.

“Some of you may see grey hair, wrinkles, even a walking stick or two,” said Lee. “But I see knowledge, wisdom, and lots of stories to be told. So take time to talk to them, hear the stories about how Bertie County was back then, and it is today.”

Rev. James Hopkins of Powellsville Baptist Church, who also gave the invocation, led the group in a round of applause for the honorees.

“I was born here and raised on a farm, and I could tell you all a whole lot,” recalled White. “I walked 12 miles through the woods to C.G. White School, but I graduated in 1944.  I have a walker, but from where I live I can just walk right across the street to my church.”

Simons recounted how there was one bus that served C.G. White students from Aulander to Merry Hill, making three trips daily.

“We had to pay a fee to ride (the bus) because the county wouldn’t let them buy gas for the trip to Merry Hill,” she noted. “But we made it, and I thank you all so very much for honoring us today.”

“There’s an African proverb that you never plant the tree that provides shade outside the village,” said Rev. Akeem Walker of First Baptist Powellsville in his benediction. “It becomes our responsibility now to plant the seeds so that when we become 90 and 100 there will be shade from the seeds that we’ve sown.”