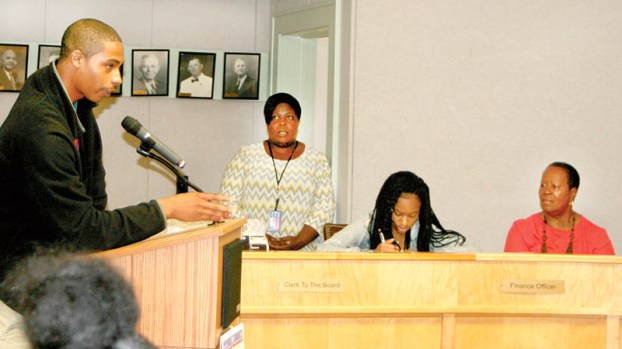 One of the NCHS students (left) presents his argument over an issue brought before the board at the mock meeting. 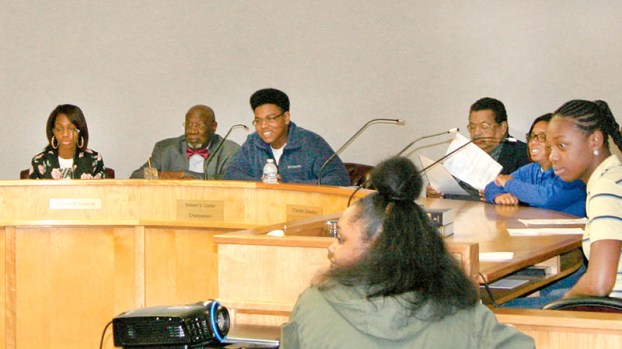 Students from Northampton County High School were assisted by county leaders on May 2 during a mock commissioners meeting held in Jackson. The event served as a way for the students to have a better understanding of the inner workings of county government. | Staff Photos by Holly Taylor

JACKSON – Students from Northampton County High School got a taste of county government on Tuesday morning. The group of a few dozen students participated in a “mock” commissioners’ meeting where they went through the process to learn how issues are handled by the Board of Commissioners.

The annual program, held in the commissioners’ regular meeting room in Jackson, was a collaborative effort sponsored by the Northampton County Chamber of Commerce, Roanoke Electric Cooperative, and Commissioner Fannie Greene. Margaret Putney and Jerry Squire, both from Northampton County High School, also helped coordinate the May 2 event.

Before the students took their places in the commissioners’ chairs, Greene welcomed everyone and posed an important question to the group.

“What is our main purpose for being here” she asked.

The answer to that question was not only to teach the students how their local county government worked to get things done, but also to inspire them to become interested and more active in the process.

“We want young people like you to become involved in government,” Commissioner Charles Tyner said as he addressed the students.

Board Chairman Robert Carter and Vice Chairman Chester Deloatch were also in attendance to assist and encourage the students. Each commissioner spoke to the students about what their role was as a member of the Board, and explained which areas of the county they represented.

Each explained briefly their job duties, such as how the County Attorney’s job is to advise the Board if they have questions on laws and statutes.

The mayor of Jackson, Jason Morris, also spoke to the students on how town government functions similarly to county government.

After the students introduced themselves to the room as well, it was time for the mock meeting to begin. Students took their places in the seats usually occupied by the commissioners and county officials, with the actual officials sitting nearby to offer assistance. The rest of the students split into two groups.

The students held a public hearing in the same way that a real public hearing would be conducted. The topic of discussion was whether to allow students to go off campus for lunch.

The student chairman of the board opened the floor up for comments in support of and against the proposal.

Students in favor of eating off campus for lunch presented their side of the issue, citing points such as disgusting cafeteria food, the willingness to take responsibility for their actions off-campus, and the fact that teachers are allowed to go off campus themselves.

On the other side of the issue, students argued safety concerns and money concerns as reasons to remain on campus. They also suggested the idea of working to improve the lunches already provided by the school.

With the issue settled, the student chairman adjourned the meeting. The students concluded their trip to Jackson with a tour of the Northampton Museum and then were served lunch at the Cultural and Wellness Center.

“I hope it was a learning experience,” Greene said afterwards and praised the students for being well-behaved and attentive.