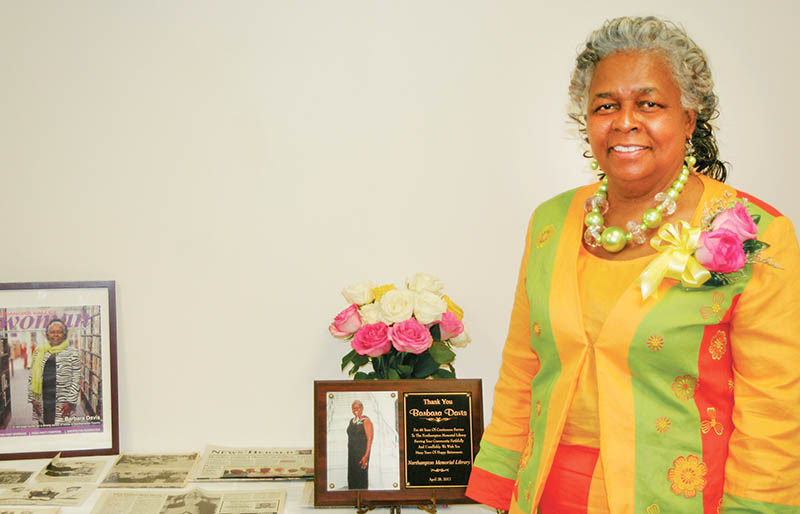 Barbara Davis stands alongside a plaque given in appreciation of her long tenure of service as well as a new mementoes from her past, to include newspaper clippings documenting her career as Librarian at the Northampton County Memorial Library. | Staff Photos by Holly Taylor

JACKSON – If Barbara Davis’ career was compiled into a book, it would be a long one. Forty-six years worth of stories long. But now after over four decades of library work, Davis has reached her retirement chapter.

She’s stepping down as Librarian of the Northampton County Memorial Library in Jackson, a position she’s served in since 1989.

A native of Northampton County, Davis began her long career in library work after she graduated from Gumberry High School in 1968. She took a position as secretary and librarian assistant at the Coates Elementary School in Seaboard that same year.

In June of 1971, Davis continued her career at the Northampton Memorial Library as the driver of the library’s Bookmobile. During that time, she also served as one of the library’s secretarial assistants until her promotion to Librarian in 1989.

During her tenure at Northampton County’s library, Davis worked tirelessly to make sure the library offered as much as possible and that everyone had access to resources they needed. 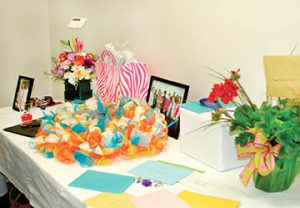 A table full of cards, gifts and flowers represented a job well done by retiring librarian Barbara Davis. Her retirement party was observed on Friday, April 28 in Jackson.

“I take the greatest pride in the fact that I am the librarian of Northampton—the greatest privilege a person could have is to give good books to people who are hungry for them,” Davis said of her work. “The only thing I have ever done to make the world a better place to live is to promote libraries.”

Davis’ desire to bring about library improvements over the years included a renovation project that added two handicap bathrooms, a computer lab with new computers, a multi-purpose room, and outside wind turbines and solar panels to supply energy for the indoor and outside lighting.

Along with physical improvements, Davis has seen the library add more opportunities to benefit the community such as work services for all ages, proctoring for colleges, and access to the Ancestry Library. The Summer Reading Program for children has been offered since 1980.

While Davis juggled a variety of duties during her years of work, including organizing library materials, attending seminars, handling bookkeeping, and issuing library cards, she’s also had the opportunity to see her library patrons grow up. She said it’s been nice to watch young children come to the library with their parents who themselves had also grown up visiting Davis at the library.

A reception to celebrate Davis’ 46-year career was held at the library on Friday, April 28. With a bright smile on her face, Davis greeted everyone who attended and thanked them for the support over the years. She received a plaque in commemoration of her work.

“I guess I’ll have to find a new hobby,” Davis laughed when asked about what she planned to do next.

This chapter of Davis’ life has come to an end, but the book certainly isn’t over.