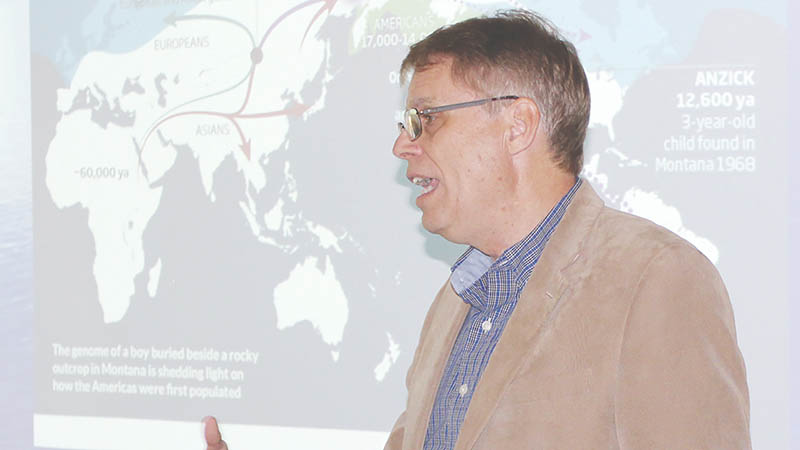 ECU anthropologist Dr. Randy Daniel was one of four lecturers at the 2017 Lost Colony Festival. Daniel spoke on life along the North Carolina coastal plain before the Lost Colony in 1587. | Staff Photos by Gene Motley

WINDSOR – From a colonist in period costume searching for colonists, to a Native American longhouse, to the latest artifacts excavated in Bertie County, the second annual Lost Colony Festival had something for everyone from history buffs, to garden lovers, to the just-plain curious.

Windsor Tourism Director Billy Smithwick assembled the first festival a year ago, and once more the venue was the Cashie River Center in Windsor.

There were a little more than 200 attendees for the 2017 Festival, down from a year ago, but still plenty to learn about how Bertie County played a part in the colonization of 16th century North America along the North Carolina Outer Banks. More importantly, festival goers may have gained insight into what may have become of the 117 settlers Englishman John White left behind on Roanoke Island in 1587.

“I’m not sure I can answer where is the Lost Colony, or what happened to the Lost Colony,” said Dr. Arvin Smallwood, chairman of the History Department at North Carolina A&T State University in Greensboro, “but I hope I can lay some groundwork on what the archeologists are trying to say.”

Historian Willie Balderson of Jamestown, VA dressed in period costume for his lecture on one of the members.

Smallwood, who originally hails from the Indian Woods community in Bertie County, was one of four lecturers who appeared at the Festival.

The others included Dr. Randy Daniel, chairman of the Anthropology Department at East Carolina University in Greenville, and a world-recognized authority on Native American culture in North Carolina.

“This event was an opportunity to educate the public,” Daniel said. “This is a huge part of history that could start a movement for all sorts of discoveries in North Carolina.”

One of Daniel’s favorite topics is the Native American culture along the Albemarle Sound region and between the Roanoke and Chowan Rivers.

“It was a hunting-gathering-fishing economy,” said Daniel. “And it’s great to see so many people interested in heritage, because we all share a common heritage and while they may not be related to Native American groups, or colonials, I think there’s a fascination about our past and that’s what makes us human.”

Willie Balderson of the Historic Jamestown (VA) Rediscovery Foundation was in period costume portraying a genuine historic figure, Anas Todkill.  With the historic recreation, Balderson seeks to convey the story of one of the original explorers with John Smith who explored the Chesapeake region of Virginia looking for the Lost Colony.

“He (Todkill) is quoted some 11 different times as having co-written parts of what Smith would later publish,” Balderson reveals. “He appears on lists the exploration of Pomonkey, both times in 1608 and on the third of the three efforts to discover the lost colonists in 1609.”

Part of Balderson’s presentation poses the question of how well the colonists may have mixed with the indigenous Native Americans along the Albemarle Sound (Bertie County).

“The idea was that (the colonists) had been on the ground with the indigenous population of Indians for the 20 years, and they might possibly know if there was a Northwest Passage, or where the gold, silver, tin or copper was located,” he said. “This was more than a rescue mission, but also to know who the power brokers were of that era.”

Balderson says Smith recognized Powhatan – the main political and Native military power of the time – could lead the explorer to the colonists as well as gives them insight into the politics of the region.

“It would have been enormous for them,” he noted.

Balderson’s presentation also poses the question of whether the Lost Colonists were wiped out to prevent further colonization of the region.

“They didn’t want the two groups to meet up,” he explained. “Even though the Indians were primitive in other ways, their society is incredibly complicated and advanced.  Just look at what they could do with stone (arrowheads); this just amazed the Europeans.”

Balderson says there is a lot of bias in looking back at that portion of history that needs to be more clearly explored.

“Look at where and what they were in time,” he acknowledged. “They were incredibly evolved, so they invaded for resources, much like the Europeans, it was just a different environment.”

The final lecturer was Nick Luccketti, a noted archeologist with the James River Institute and a former professor at Christopher Newport in Newport News, VA, who has excavated in Bertie County with the First Colony Foundation for several years.

These excavations on the Albemarle Sound near Salmon Creek have produced new artifacts such as border ware and storage jars at a location called Site X, indicating a small group of colonists may have moved inland.

“I don’t think any researchers, scholars or adventurers deny there was some group of colonists that did go to Croatoan,” Luccketti maintains. “There is a very good argument that can be made that the main body did not go because such a large number descending on an Indian village would put incredible pressure on the food supply that was available. For a large number of Englishmen to move to a friendly Indian village with all those competing mouths for a very limited supply seems like an incredible possibility.”

Each year the Festival has added more to its Lost Colony museum.  This year’s addition is a Native American longhouse to go with the dugout wooden canoe, displays of excavated arrowheads from the 2016 exhibit.