Scenes from the ‘Backroads’ 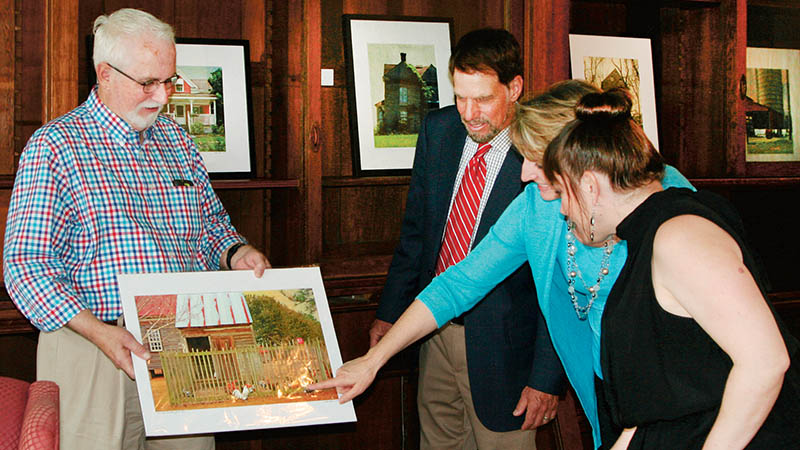 Watson Brown, left, talks about the story behind his photograph of a lively chicken coop on Friday of last week during a showing of his work at Revelle Realty on Main Street in Murfreesboro. | Staff Photos by Holly Taylor

These are the scenes of “Backroads: The Down East Photography of Watson Brown,” the title of his art show currently on display in Murfreesboro until June 16. The artist from Edgecombe County travels around the eastern part of the state snapping photos to preserve the history and memories of each place he passes through.

Brown says he takes many of his photos in the counties by the Virginia border, including Hertford and Northampton, simply because there is so much history to explore there.

“My photographs are to give future generations a chance to see many places that will one day be gone, while documenting the special things that have made eastern North Carolina so unique,” Brown said in a statement about the art collection.

His artwork is created by editing the photos on his computer, tweaking the image to create more depth and texture or to enhance the colors. 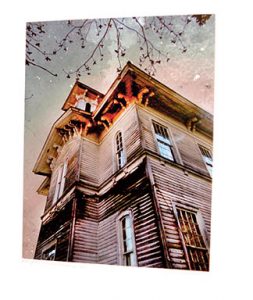 “Midnight at Magnolia Academy,” one of Brown’s favorites, was photographed during the day and then edited to create a nighttime feel.

Some edits are minor, such as overlaying a texture to the clouds, while others are major, like changing a bright noontime shot to look like the dead of night. He says he spends a couple hours in the evenings working on what he’s photographed during the day.

“I paint with a computer mouse,” he says.

Brown took up photography as a hobby around 2011, and people are always surprised to learn he’s had no formal training in the subject.

The art show is being hosted at Revelle Realty, located at 129 East Main Street in Murfreesboro, in the renovated building that once served as a pharmacy. Elicia Revelle, the business owner and an art lover herself, decided to host an art show to fill the empty walls after the renovations were complete.

Now Brown’s artwork lines the walls of the interior, including being displayed inside the restored oak cabinets left behind from the pharmacy. Revelle plans to continue hosting more art shows after this one concludes.

“He does a good job of finding subjects,” Revelle says proudly of Brown’s presentation.

A reception to celebrate the opening of the show was held on Friday, April 21. Brown happily chatted with everyone who came to view the artwork, answering any questions and explaining the stories behind many of the pieces. Several locals who stopped by were self-proclaimed fans, already familiar with his work from his instagram page (instagram.com/planterboy) or his Facebook (Watson Brown).

The art captured the attention of anyone who came through the door. Some were intrigued by bright photographs of rundown country stores and old-fashioned chicken coops while others enjoyed the eerie look of collapsing houses and broken dolls left behind inside.

“I try to capture all aspects of life,” Brown says of his work.

Rich or poor, dilapidated or restored, he photographs it all.

For people interested in viewing Brown’s work, Revelle Realty is open Monday through Friday from 10 a.m. to 2 p.m., and also by chance or by appointment. You can contact Elicia Revelle at 252-396-1244 for more information.

All of the art is for sale and ten percent of the proceeds will go to the Murfreesboro Historical Association.