MURFREESBORO – Rick Heckler was sworn in as the newest member of the Murfreesboro Town Council at their regular meeting held on April 26.

Heckler, who spoke at the meeting to say he was thankful for the opportunity, is filling in as an interim after former Councilman John Porter resigned, citing personal reasons, effective January 31. 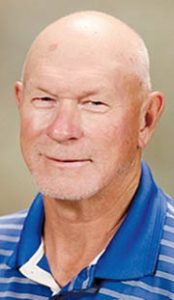 According to minutes from the March 22 meeting, the Council tabled the decision to appoint the new Council member until the April 12 meeting where applicants would have the opportunity to speak before the Council.

When April 12 arrived, Mayor John Hinton called on each applicant to speak. Castle, Harris, and Heckler each stated reasons why they wanted to serve on the Town Council and what experience they could bring to the position. Stephens was not able to be present at the meeting because she was tending to her husband in the hospital, but called ahead to let them know she was still interested in serving on the Council.

Joyner did not attend the meeting.

The minutes for the April 12 meeting stated that Councilman Bill Theodorakis nominated Rick Heckler to serve out the rest of Porter’s term. With no other nominations, the Council voted and Heckler was appointed by majority vote. Councilman Hal Thomas was the only dissenting vote.

Heckler will only serve as an interim until the Murfreesboro municipal election scheduled in November, in which anyone who files as a candidate can run for the open two-year term seat.

During public comments at the beginning of the April 26 meeting, Berna Stephens spoke to state her concern about the Council’s appointment of Heckler.

Stephens explained that she believed she had been unfairly treated during the application process by being denied the opportunity to make her case before the Council at the March 22 meeting.

“I’m not just sitting around waiting or looking for something to do,” she said after she explained her active role in the town’s community and her qualifications for the position, including serving on Murfreesboro Parks and Recreation Commission.

Stephens concluded her remarks with concerns over the racial balance of the Council, as previously there had always been African-American representation. She stated that she felt she had been racially discriminated against during the application process.

At the conclusion of the Council meeting, Mayor Pro-Tem Sarah Wallace stated that the vote to appoint Heckler was not racially motivated and was simply based on his credentials. She reminded everyone that the position was only temporary and people are welcome to run for the Council seat in November.

The dates to file as a candidate in the election are July 7 through July 21.