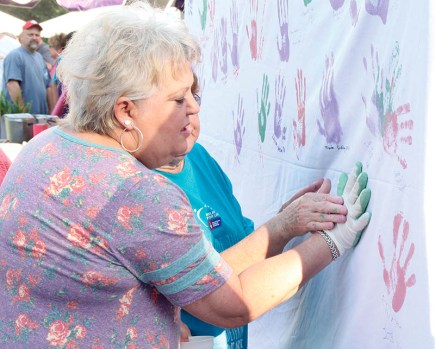 Felicia Hollingsworth (foreground), who has battled cancer, is assisted by Reecie Ray as Hollingsworth places her handprint on the Wall of Survivors at this past weekend’s event in Murfreesboro. 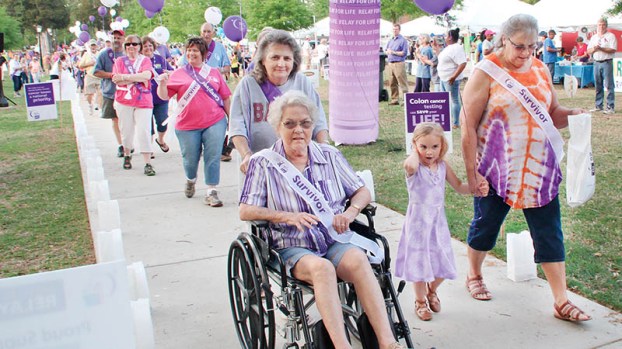 Cancer survivors, some accompanied by their caregivers and/or family members, lead the way on the traditional opening lap at the annual Hertford-Gates Relay for Life. | Staff Photos by Cal Bryant

MURFREESBORO – They dodged the heat of a mid-spring day, and even a few raindrops at night.

But what they didn’t back down from was the never-ending quest to find a cure for all types of cancer.

The Hertford-Gates Relay for Life celebrated another year here April 21-22, complete with the same fighting spirit in their collective souls found at previous events.

“We do have until the end of August to keep raising funds for the 2017 Relay,” said Winnie Matthews, one of two individuals to serve as Event Leads for this year’s event.

“We have not met our goal yet, but we are getting there and I have lots of confidence that we will get there by the end of the Relay year,” Matthews stressed. “There are still fundraisers going on and it’s not too late to make a donation. We are very thankful for all the support from the local communities.”

Matthews’ partner as Event Lead is Patty Hale, who noted that this annual event is always successful from the standpoint of benefitting the American Cancer Society.

“Despite the rain that came in the early hours of Saturday, we had an awesome event,” Hale stated. “We succeed each year with the love and support from our event leads, committee, our survivors, family, friends, Chowan University, the town of Murfreesboro and Hertford County and Gates County.

“We all have such a big heart and passion for the Relay for Life of Hertford-Gates. Much appreciation is shown for those who play a major part in the Hertford-Gates Relay.  We would not be where we are today if it was not for those involved,” Hale added.

“I am so proud to be a part of Hertford-Gates Relay team and to work with so many wonderful and dedicated people,” Matthews remarked. “Patty Hale and I may be the leads for this year, but without our dedicated committee and teams we could not have made this 2016-17 year and Relay event such a success this far.”

Following tradition, Friday evening’s portion of the annual event began with a salute to those who have survived cancer. That group was seated in front of the main stage and listened as Casey Pearce and Brandy Robertson of the Cancer Care Service Team at Vidant Roanoke-Chowan Hospital explained about the health impacts and treatment options of melanoma. They said over 1 million cases of skin cancer are diagnosed each year, and is more common among younger adults.

“Skin moles are common on most everyone, but if they start changing in shape or size, we would advise you to get them checked out by a doctor,” Pearce stressed.

Robertson, a radiation therapist at Vidant Roanoke-Chowan Radiation Oncology, is the daughter of a liver cancer victim. She said Relay for Life is very near and dear to her heart.

“Vidant has assembled a hard-working team to battle cancer in Ahoskie,” Robertson stated. “We are able to diagnose and find the best and safest treatment possible for each individual. We’re able to use state of the art technology.”

Following the presentation, survivors assembled for their traditional opening lap around Chowan University’s scenic Squirrel Park. That was followed by the Caregiver Lap and the formal introduction of the participating teams.

At 9 pm, all activities came to a halt and the night lights were lowered to mark the beginning of an emotion filled luminary ceremony. The names of those who have battled cancer and survived along with those souls lost to the disease scrolled across a giant screen while the large crowd sat in silence.

After a night of “theme laps” (two of which were washed out due to rain showers), Saturday dawned with ample sunshine. The traditional crowning of Little Mr. Relay (captured this year by Parker Dixon) and Little Miss Relay (Michaela Futrell) preceded the annual Kid’s Walk.

Lyric Pittman was recognized for the winning artwork he designed for the Kid’s Walk t-shirts.

Relay closed at high noon on Saturday, but not before several awards were bestowed among teams and individuals.

Earning the top award for Best Banner was Roanoke-Chowan Community Health Center. Best Community Campsite Theme was captured by Union Baptist Church. The Best Campsite Theme for a Chowan University team was given to the International Students Club.

Each year, Relay for Life organizers recognize two individuals for their outstanding efforts in making the event such a success.

The 2017 Heart of Relay Award was presented to Ann Brinkley. The 2017 Impact Award was earned by Courtney Mitchell.

The remaining awards will be presented at the Relay for Life wrap-up meeting later this year.