Presley named Volunteer of the Year

AHOSKIE – Claire Presley was awarded the distinction of Volunteer of the Year for Roanoke Chowan Christian Women’s Job Corps at their annual Volunteer and Supporter banquet held April 8.

Presley helped found the organization and has been a volunteer and supporter since 2011. She was on the original Advisory Council and 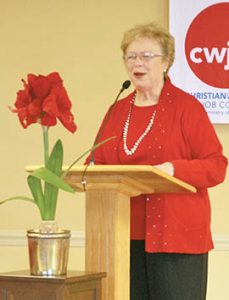 served as the Board President when they became a 501c3 organization. She has just rotated off the board in January 2016 and continues to serve as a mentor to participants.

Roanoke Chowan Christian Women’s Job Corps helps women in need with job skills and life skill classes and helps with tuition and transportation to local area colleges. The organization has helped over 120 women in Hertford, Bertie, Gates, and Northampton counties. Their goals are to help women improve their life and achieve their goals of education, self-esteem, and self-sufficiency. They are a Christian organization and always hope they will strengthen or establish a relationship with God.

“Roanoke Chowan Christian Women’s Job Corps probably would not have been established here in Ahoskie, without the support and leadership of Ms. Presley” stated Pat Byrd, RCCWJC Executive Director.

Presley serves as the Deacon Chairperson at First Baptist Church in Ahoskie and also serves on the NC State Women’s Missionary Union Executive Board.

She resides in Gates County and is the wife of the Reverend Billy Presley. She is a wife, mother, grandmother, and great grandmother and serves as a Christian role model for all.