WINDSOR – Whenever Jannie Swain hears someone say “your home is your castle”, the words will have special meaning.

Swain, 43, hasn’t moved into her new house, but she already feels at home. Swain is in the process of becoming a Bertie County homeowner and the county’s first Habitat-for-Humanity/State Employees’ Credit Union Mountains to the Sea Challenge recipient.

“This is just so wonderful, so wonderful,” she exclaimed, giggling and unable to contain her excitement. “It’s just too hard to describe it.”

The Challenge is a joint initiative between these two state organizations to expand affordable housing in a three-year period across the Tar Heel state by building or renovating 100 houses – one in each county in North Carolina.

“After much negotiation, they decided they would give us $10 million, total,” said Habitat-for-Humanity of North Carolina (HHNC) Executive Director Greg Kirkpatrick, who came to Windsor to help celebrate Swain’s selection with a small gathering that convened at the home site located on King Street. 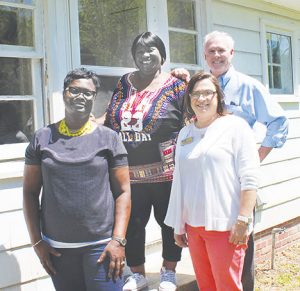 Jannie Swain (2nd, left) poses at the Habitat for Humanity/SECU Foundation home being renovated in Windsor that Swain will take ownership of later this year. With her are (from left) Habitat Intake Coordinator Valerie Burrus; realtor Christie Cooke, and state Habitat Executive Director Greg Kirkpatrick. | Staff Photo by Gene Motley

A year ago, Kirkpatrick had told Bertie County Commissioners he was working with CADA, seeking to find deserving families in each county of HHNC’s service area.

The way the process works, upon completion of the building or renovation of the home and closing of the mortgages, the SECU Foundation will then purchase the homeowner’s mortgage at full face value and then give Habitat the funding to serve another family until the campaign’s 100-county goal is achieved. If available, funding will be used to continue building more houses and assisting more families with their homeownership endeavors; so several Habitat homes could be built within the service area.

Bertie is unique because there is no local Habitat affiliate located in the county.  Because of this, work on Swain’s home is being undertaken under the umbrella of the state organization, HHNC as part of Phase-One.

As of March 1, Phase-One houses in a dozen counties had been completed (Scotland, Yancey, Avery, Edgecombe, Chowan, Anson, Richmond, Ashe, Northampton, Duplin, Warren and Watauga). HHNC then closed the mortgages with a homebuyer, and assigned those mortgages to the SECU Foundation for payment. Furthermore, homes in the Phase-One counties of Hertford, Lenoir, Bladen and Rutherford are within weeks of closing, meaning 85 percent of all Phase-One projects have started, including the one in Bertie.

Swain attended the Habitat meeting at the Bertie campus of Martin Community College and submitted her paperwork for review. The process usually includes taking first time home buyer’s courses, meeting with a Housing and Urban Development (HUD) Certified Housing Counselor, as well as completing various exercises showing that one is truly prepared for home ownership. A credit background also has to be reviewed.

“I run the application process, but applicants must meet the income guidelines for Bertie County, and the guidelines for each county are different,” Burrus said. “You have to have a qualifying credit score, references, criminal background check and you also have to do the ‘sweat equity’, assisting with the actual home-building or renovation.”

“We had to work with a local realtor to find this house,” said Kirkpatrick, in describing the ‘fixer-upper’. “We then worked with the Commissioners to find a deserving homeowner. The thing with SECU is it had to be a new house, or a rehab.”

Kirkpatrick said the original homeowner’s price was more than Habitat was willing to pay, but after negotiation they were able to still purchase it at what he called ‘a fair price’.

Christie Cooke of Coastal Rivers Realty in Washington, NC had the house listed, told Bertie County Commissioner Tammy Lee about the property, and the process was started.

“I’d been looking for houses for Habitat for about a year now,” said Cooke. “Someone else had it listed, but I’m the one who sold it.  I knew it was a good fit, so I sent it in, and we went from there.”

After Swain’s application was reviewed – she was thoroughly vetted by Habitat – part of her selection was because she wanted to live in Windsor to be close to her workplace.

“We asked her if we rehabilitated this house if she would want to live there, and she said, ‘Sure’,” Kirkpatrick recalled. “We liked that. We made sure if we did this we would have a buyer.”

Swain has one daughter, Shaniece, age 3, and the house, located on King Street, is a two-bedroom, one-bath unit which suited her perfectly according to HHNC.

After each house is built the client family will assume a no-interest loan.  SECU Foundation essentially assumes the mortgage, returning the funds to HHNC so that another Habitat home can be built.

Swain acknowledges this is a huge step in her life, but one she’s prayed for a long time.

“I always wanted something like this,” she said with emotion in her voice, “something for me and my baby.”