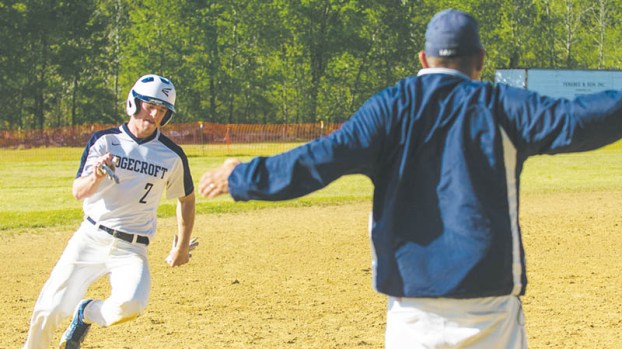 Ridgecroft’s Nick Hoggard (#2) gets waved around third base by coach Joe Maione in the consolation game of the Sgt. Will McLawhorn Scholarship Tournament at Lasker on Tuesday. The Rams crushed Northampton County 16-2 as Hoggard drove in four runs. | Photo by Angie Todd

LASKER – Four runs batted in off the stick of Nick Hoggard helped lead Ridgecroft School past Northampton County 16-2 here Tuesday in the consolation game of the Sgt. Will McLawhorn Scholarship Baseball Tournament.

Hoggard drove in runs with a sacrifice fly in the first inning, a pair of singles in the second and a double in the fourth. It was the Rams’ fourth win in their last five games.

The Jaguars got on the board in the top of the first when Shyheem Futrell singled, stole second, went to third on an error, and scored when Jamonta Branch clubbed a one-out base hit to centerfield. It was 1-0, Northampton, after a half-inning of baseball.

It didn’t take Ridgecroft long to get going in their half of the frame. Zeb Askew reached on a dropped third strike and the floodgates opened from there. Askew stole second and went to third on David Basnight’s bunt single. Hoggard’s sac fly was dropped, but brought in the first run; then Wyatt Whitley clubbed a two-run grounder and later scored on an error. The last run of the inning was scored like the first: on a dropped third strike. The Rams now led it 5-1.

Northampton pushed across another run in the top of the third. Branch doubled, went to third on Tremane Williams’ hard grounder, and then scored on a thrilling steal of home plate.

The Rams’ 16th and final run came in the bottom of the fourth when Basnight walked and scored on Hoggard’s double to right field. The game was called after four-and-a-half innings with Ridgecroft getting the 14-run win.

Ridgecroft banged out 13 hits. Basnight, Hoggard, and Whitley each collected three hits apiece for the Rams. Whitley and Hoggard each drove in four runs to lead the Ridgecroft offensive attack. Branch went 3-for-3 at the plate to lead Northampton.

“I think we’ve turned the corner,” said Rams coach Joe Maione. “The guys are buying in, and we’re getting some consistency. Most of all, they’re having fun.”

Ridgecroft (10-8) returns to Tarheel Independent Conference play with their regular-season finale next Thursday in Merry Hill against Lawrence Academy.