PERRYTOWN – Relief may be in sight.

Bertie County Emergency Services Director Mitch Cooper informed the Bertie County Commissioners at their April meeting here Monday night that final paperwork has been submitted to the Federal Emergency Management Agency (FEMA) that may provide funding assistance necessary for money the county spent on clean-up, safeguarding the public, the restoration of the Windsor EMS Station-One; and hopefully the Lawrence Memorial Library and the County’s Cooperative Extension offices – all heavily damaged by two extreme storms last year.

“It’s for the damages that occurred and the money that was spent by the county to respond to Hurricane Matthew,” Cooper reported. “The three that have been signed are for our debris removal, our emergency protection measures, and for our EMS station.” 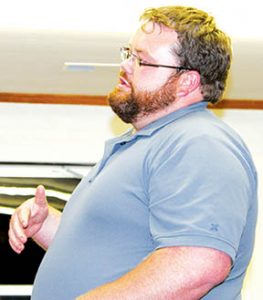 EMS Station-One on Dundee Street in Windsor was completely flooded following Tropical Storm Julia in September.  The operation was temporarily moved to the Council on Aging offices on W. School Street in Windsor, but that headquarters had to be evacuated in October due to FEMA’s use of the facility following Hurricane Matthew.  It now temporarily resides at Bertie Early College High School off NC 308 (Governor’s Road).

“Hopefully we’re now 30-45 days away from seeing the cash flow,” Cooper added. “Now we’re ready to start working on the public worksheet for the Library and the Extension office. It’s been extremely challenging for Bertie County.”

Cooper also expressed gratitude on behalf of his department to the delivery of the four brand new Paramedic-ready ambulances delivered a week ago.

“They’re all on the road, they are responding,” he informed. “Our employees love it and we’ve now gone a whole week without anything breaking down.”

Cooper explained that with the old EMS ambulances, maintenance and upkeep ran about $60-65,000 annually; the payments on the four brand-new rigs: $68,000, fully equipped.

“These units were designed based on the needs of Bertie County,” he explained. “It was an economical decision for us on the savings; and it makes it much easier on the EMT’s and the Paramedics in the field so they can be more efficient.”

“We (both) respond to multiple scenes and problems in the county where we spent long hours in the field,” he said.

Cooper cited the overturned propane tanker on NC 45 a few weeks ago that forced the closure and detour along that main artery between Washington and Bertie counties.

“That was a HAZMAT (hazardous materials) issue; now, in addition to investigations of wrecks and murders, this year we’ve also had a tornado,” he said. “We’d like to get this under control where we both could have somewhere to work.”

Cooper said a unit had been located in Wisconsin that County Manager Scott Sauer says had a list price of just under $19,000, which Cooper says he would be visually inspecting in the near future. Sauer added that when Cooper explained what Bertie County had been through in the past eight months, the price dropped to $16,000.

“It probably contains about $100,000 worth of equipment in the office section alone,” Sauer said.

“If we agree that’s what we need, then we’d like to bring it home to better respond to our incidents in the county,” he said. “It’s 42-feet long and we’d have to store it (on US 17 Bypass) behind Bill Clough Ford.”

Cooper said two campers that had been donated to the county after Hurricane Floyd (in 1999), he would like to either auction off if the US Forest Service shows no more interest in acquiring them.  He also said the county’s old equipment (ambulances), now out of commission, could be signed over to a non-profit in Mexico.

“Apparently, there are certain cities (in Mexico) looking for equipment, and they showed an interest in our (old) ambulances,” Cooper said. “We bought them used, and we’ve worn them out twice.”

The Commissioners did warn the EMS Director to vet the non-profit organization to make certain they are legitimate.  They also wanted him to explain, for the record, the need for the new service vehicles.

“We run about 10 trucks a day now,” he explained. “With the four new ones added we have about 20 vehicles, and we’re looking to de-commission three, with several others going over to non-emergency transport (NET).”

Cooper wanted to emphasize that while some are questioning the cost of the new ambulances, they now contain six brand new heart monitors worth $28,000 each.

“We bought new stretchers and up-to-date radios because Bertie County is becoming part of a nine-county ‘Strike Team’,” Cooper revealed. “This would mean six ambulances and a supervisor. We were very fortunate during the floods to have people come in and help us, and we would now like to return the favor to some of our neighboring counties that if something happened to them we could go there and help them. The new radios allow us to talk across the state.”