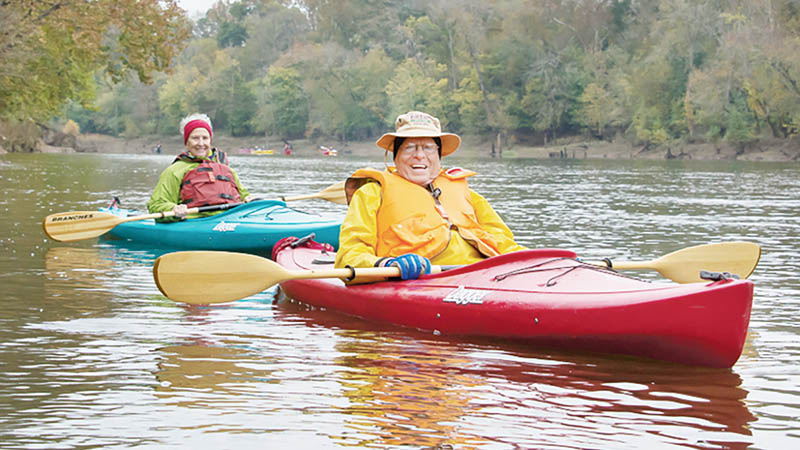 Whether it’s a single-day canoe trip, or an overnight stay at one of the camping platforms, the Roanoke River Paddle Trail is enjoyable for all tastes and skill levels. | Photos by Carl Galie

JAMESVILLE – Roanoke River Partners is marking a milestone with its 20th anniversary.

A celebration is planned for April 22 at Hardison’s Barn in Jamesville. The event will include dinner, silent auction, book signing and more. This event will coincide with a “Paddle the Roanoke” event on April 23 hosted by Martin County Tourism and Chamber of Commerce. For event information, go to www.roanokeriverpartners.org.

Incorporated in 1997, RRP was formed in response to a declining economic climate for the counties that border the Roanoke River in North Carolina. Since then, RRP has cultivated partnerships and garnered support to develop and market the region as a destination for outdoor adventures and small town experiences, capitalizing on the area’s natural and cultural assets as a source for new enterprise.

RRP’s signature achievement has been the development and promotion of the Roanoke River Paddle Trail, encompassing more than 200 miles of waterways featuring 16 rustic camp sites along the river.

A pioneer of this type of development in North Carolina, RRP is considered the “grandfather” of water-based trails incorporating a system of camping platforms along a multi-county stretch of connected waterways. 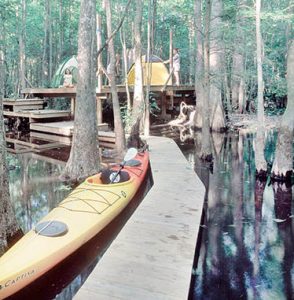 “For much of the past 20 years, the Roanoke River Partners have been raising public awareness of this great river and its astonishing system of swamps, islands and tributaries, which supplies most of the fresh water in Albemarle and Pamlico Sounds,” said Bland Simpson, author of “The Inner Islands” and “Litter Rivers & Waterway Tales.” “This wonderful group has inspired, and led, thousands onto the Roanoke’s many waters and made it possible for adventurous boaters to find their way into the lower Roanoke’s most remote retreats and spend a night or two on well-made tent-camping platforms there. What made them do all this grand conservation work? Nothing but the deepest love of the beautiful, powerful, haunting Roanoke River – our Amazon.”

As intended, the trail has attracted outdoor enthusiasts from across the United States as well as other countries. RRP’s reservation system books more than 1,200 overnight stays each year. An estimated 5,000 paddlers access the river for day trips annually.

This visitor traffic helped spur the opening of outfitters like Williamston-based Roanoke Outdoor Adventures, which contributes to the local economy.

Trail users also spend money on gas, groceries and needed supplies in local towns. A recent study by NC Growth showed that RRP’s operations return over $550,000 to the regional economy each year.

In addition to the nationally-recognized water trail, RRP also has spearheaded the preservation of the former Hamilton Colored School with plans to repurpose it as the Rosenwald River Center in Martin County.

The school will serve as a community center and interpretive site to highlight the region’s Rosenwald history and the Roanoke River’s role in the Underground Railroad. A master plan for development is nearly complete – and with it, RRP is kicking off a $300,000 capital campaign to support this historic preservation project.

Over two decades, RRP has cultivated partnerships and garnered both public and private support from state and national organizations, county and town governments, regional tourism and media partners, outfitters, other small businesses and organizations, and many dedicated individuals. The Roanoke River Mayor’s Association and 15 member towns have provided leadership and support as well.

In the future, RRP hopes to attract even more visitors to the region while fostering community pride among residents.

“RRP will continue to join forces with compatible interests to expand the regional brand cultivated over the past 20 years,” said Carol Shields, director of RRP.