Jump on the ‘Energy Bus’

PENDLETON – With an atmosphere of positivity and enthusiasm, the teachers and staff of Willis Hare were ready to climb aboard the “Energy Bus” during their kick-off celebration on April 12.

Willis Hare Elementary School will be the first in the state to join the Energy Bus for Schools Leadership Journey program. The program was developed in 2016 by Niki Spears, a former school administrator, and is based on “The Energy Bus” book by Jon Gordon. 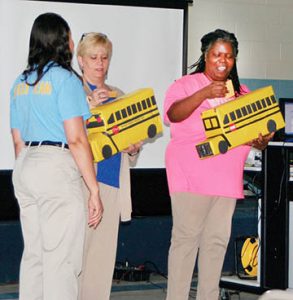 This group of Willis Hare Elementary School teachers gleefully return to their seats after their skit used as a kick-off to the school’s Energy Bus program. | Staff Photos by Holly Taylor

According to the Energy Bus for Schools website, their mission is “to inspire and develop leaders (students and educators) who positively impact schools, families, communities, and the world.”

The program itself will provide training for the staff on how to sustain positivity in schools through strong leadership while also using strategies to develop positive educators and empower children to become encouraging leaders. By creating a more encouraging environment, the program’s goals are to improve the learning process and academic success.

Kimberly Scott, principal of Willis Hare, was excited to help the school join the Energy Bus after she met Spears at a conference in January. The elementary school used a Gofundme account to raise the money they needed to implement the program.

While the program will officially begin during the 2017-18 school year, the teachers and staff gathered together to celebrate the “Energy Bus Big Reveal” after school on April 12. The event featured a video message from author Jon Gordon and a few words via Skype from Spears.

“We’re expecting some big things from you all,” Spears said after emphasizing the importance of both student and adult learning in the leadership program.

Because positivity is the heart of the Energy Bus, the kick-off celebration also featured the teachers presenting different ways to show their excitement about the program. There was singing and dancing and cheering all around.

Gaston Middle School’s band was also in attendance to provide musical entertainment for the event.

Northampton County Superintendent Monica Smith-Woofter concluded the event with some positive words about the new program. 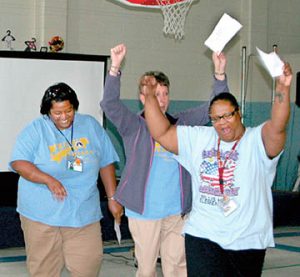 “Before we teach, we have to inspire,” she said.

The wheels on Willis Hare’s energy bus are starting to turn, and if the Big Reveal event is any indication, it will leave a huge positive impact on everyone who passes through the school’s doors.