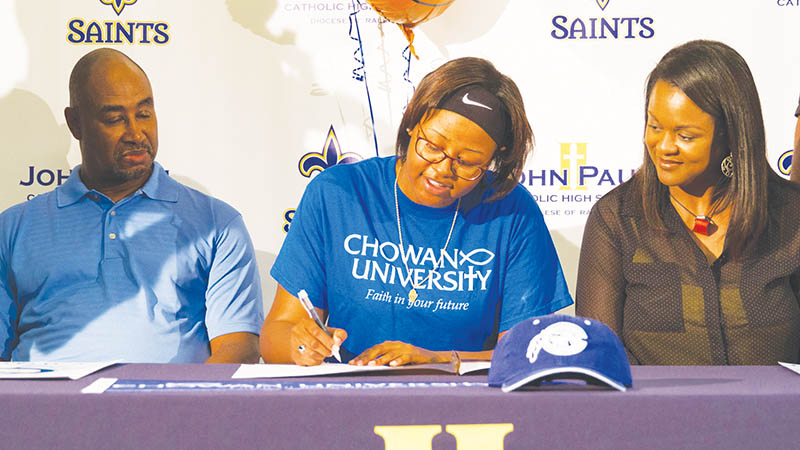 In addition to playing interscholastic basketball at PJP2, Neal also plays on a traveling girl’s basketball team, the Carolina All Stars. Between seasons, Neal is also a member of the PJP2 women’s volleyball team. 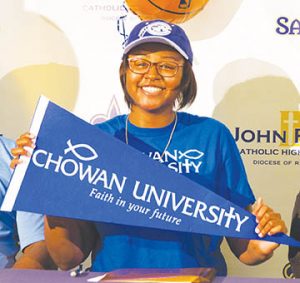 “The main reason I chose Chowan was simple,” Neal said after the signing. “This was where I felt at home. Throughout the recruiting process they were the ones who showed the most sincere interest in me. They didn’t waiver in their commitment to provide me with the best opportunity to attend school. With a lot of prayer and the help of my parents it was easy to make the decision after everything we considered.”

Neal’s prowess on the court is only matched by her scholastic achievement. She has maintained a 3.3 GPA throughout her high school career while taking the most rigorous courses available at the school. Neal is also vice-president of her senior class and is involved in the VolunTeen program at Vidant Medical Center here in Greenville. In her spare time, Neal also coaches basketball with young women at her church.

“Sydnee is a wonderful young lady of high character, incredibly intelligent, and hard working,” said PJP2 principal Craig Conticchio. “Her PJP2 family is extremely proud of her accomplishments and look forward to her future.”

“Chowan wasn’t my first choice, but they made the biggest impression on me,” Neal added. “Athletically and academically I see myself succeeding here. I feel like I will be able to make my presence known on the court with my height and aggressiveness.   Therefore, when I start at the University in the fall I hope to make a big bang in the classroom as well as on the court.”

Many members of Neal’s family, including her parents, Cyncere and Michael, along with basketball coaches Chris Challender and Tom Ruffolo, trainer Keith McLawhorn, and the entire faculty and student body were in attendance for her signing.