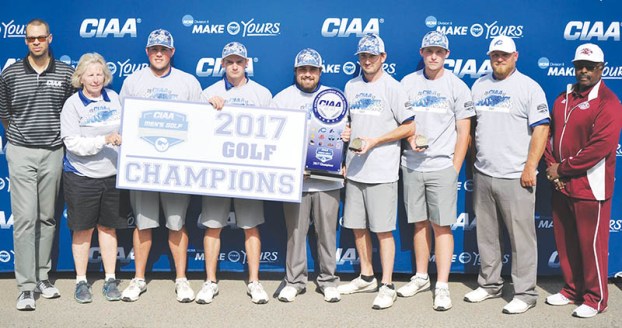 GLEN ALLEN, VA – Charging back from a four-stroke deficit after round-one, the Chowan University men’s golf team went on to capture the 2017 CIAA Championship crown here Friday afternoon at The Crossings Golf Club in Glen Allen.

Chowan shot a 325 in the opening round of play, and carded a 306 on Friday. Virginia Union finished runner-up with a two-day round score of 636.  Livingstone College finished in third (639) followed by Fayetteville State (650) while Johnson C. Smith and Virginia State University each carded a 704 tying for fifth place. The Vikings of Elizabeth City State posted a two-day total of 790 for a seventh place finish, and St. Augustine’s finished in eighth place with a two-round team score of 885.

Chowan’s Jordan Francis carded a 74 in the opening round of play before blistering the field with a 71 on Friday.  His two-day score of 145 was only 1 stroke over par, earning a No. 2 CIAA golf season ranking with his 76.5 strokes/round average., Francis was joined on the All-Tournament team by VUU’s Joshua Mohun and Shaw University’s Isaiah Shaw who both swung for a 153 total. Livingstone’s Philip Harrison and Allen Day of Virginia Union round out the five-player team.

Francis claims the second individual championship for Chowan after Cliff Forbes claimed the first in 2012.

Rich Edwards finished tied for seventh place individually in the 39-player field with a two-round score of 160 (85-75). After carding a 97 in the opening round, Edwards showed resilience in the final day of play, making up 20 strokes and carding a 77 for Chowan on Friday.

Billy Britton and Christian Fleetwood each shot an 83 in both rounds for the Hawks and concluded play tied for 14th with a two-round score of 166 while Steven Rhinard finished tied for 18th place individually.

The Hawks advance to compete in the NCAA Division II Atlantic Region Tournament on May 2-5. The NCAA Championship selection show for pairings will be released April 28, while site selections will also be released at that time.

AHOSKIE – Ridgecroft School took a lead for good in the sixth inning and captured a back-and-forth game from Pungo Christian... read more