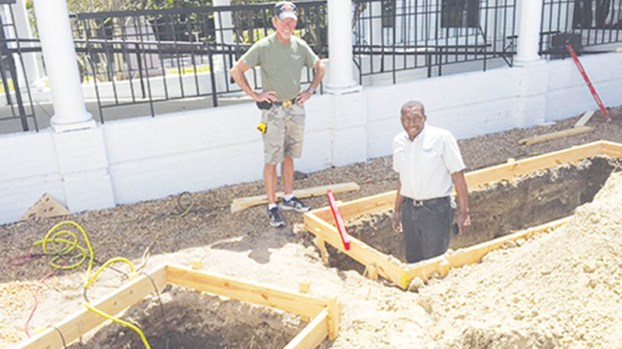 Bertie County Maintenance Director Anthony Rascoe (white shirt) and an unidentified contractor inspect the site near the Bertie County Courthouse in Windsor, which will house the Charters of Freedom, a series of bronze monument replicas of the United States’ most sacred symbols of liberty.

WINDSOR – Progress has begun here between the Bertie County Courthouse and the County Office Building with the pouring of the concrete foundation for the installation of bronze replicas of what will be the Charters of Freedom monument project.  It will be one of the first such monuments in eastern North Carolina.

Nearly two years ago Vance Patterson and Ron Lewis, Founder and Liaison, respectively, of  the Charters of Freedom, presented the idea to the Bertie County Commissioners of bringing a monument featuring the U.S. Constitution, the Bill of Rights, and the Declaration of Independence – the American Charters of Freedom – to as many local areas as possible.  As of late 2015, only six such monuments had been built nationwide, and in North Carolina. The founders say that these are educational projects, and not just simply monuments, providing access to persons – adults and children – who might not venture to Washington, D.C. to view the originals. 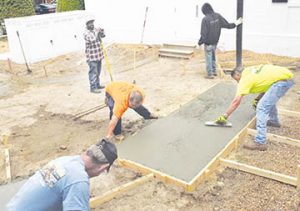 Workers pour the monument’s concrete foundation. Completion of the project is expected by summer.

The Bertie Commissioners (John Trent, Ernestine Bazemore, Tammy Lee, Ron Wesson and Stewart White) then approved the project in 2016 in partnership with the Foundation Forward, Inc. a nonprofit organization located in Morganton.  All materials would be donated and local businesses were encouraged to contribute their time, talent and skills to ensure the success of the project to make it a truly local effort providing a teaching site for school field trips, and creating a legacy focal point for future generations.

Commissioner Lee became the Board’s point person for the project and in early 2016 she said a committee had been formed and presented a list of proposed locations for the monument, including the Hope Plantation, new Bertie High School, Albemarle Sound front, and the selected site: the grassy area between the Courthouse and the Office center.  Lee also noted that even though an account was established in a local bank to provide citizen donations for the project, an anonymous donor had stepped forward and provided the full amount of necessary funds for the monument.

In March, Lee noted that concrete had been secured as a base for the project, thus reducing the cost.  Further, each Commissioner was encouraged to write a letter to be placed in a time capsule, not to be opened until the 300th anniversary of the Charters in 2087.

Monday, the first of a group of concrete slabs were poured at the site and work is expected to continue with completion expected sometime later in the summer.

WINDSOR—Feeling they had exhausted all other options, and leaving themselves in what one school board member called a “condition of... read more