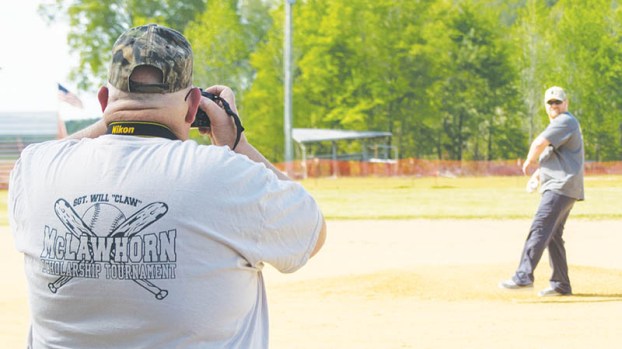 Tournament Director Rev. Willie McLawhorn – father of Sgt. Will McLawhorn – takes a photo of Tyler Davis, his son’s best friend, who threw out the ceremonial first pitch to open the event. | Photos by Angie Todd 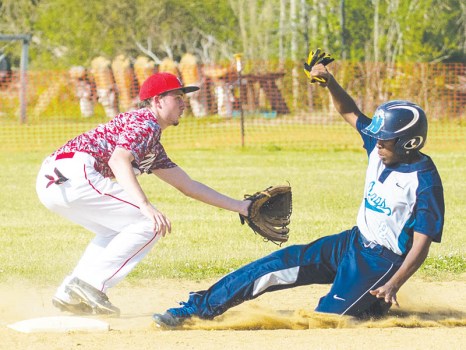 Northampton County’s Deion Jordan (right) slides safely into second base on a steal attempt as Northeast Academy’s Austin Bradley (left) awaits the throw. The host Eagles downed the Jaguars 12-4 to win their opener.

After holding Northampton scoreless in the top of the first inning, Ryan Rowe and Kevin Taylor got the Eagles going with consecutive hits. Peyton Galloway and Cole Rose drove in a run each to put Northeast ahead 2-0 after the first inning.

Northampton got on the board in the top of the fourth inning after a ground-rule double by Shyheam Futrell. He advanced to third on a wild pitch and scored on an errant throw to third as the Jaguars cut the lead in half to 2-1.

Northeast answered back in the bottom of the fourth inning. McKinley Jordan singled, stole second and scored on a single by Kevin Taylor.

Northampton came storming back in the fifth inning to take the lead with some clutch hitting. A two-run single by Futrell gave the Jaguars a 4-3 lead. It wouldn’t last long, as Northeast used 3 hits and 3 walks to take control of the game with a 7-4 lead.

Northeast added 5 more runs in the bottom of the sixth inning to put the game out of reach.

Kevin Taylor pitched a complete game to earn the win with seven strong innings yielding four hits, four runs, and striking out 12. Northampton used a total of four pitchers to try to slow the Eagle attack.

Northeast went on to face Hertford County for the championship. The Bears’ game with Ridgecroft School was suspended due to rain in the fourth inning on Monday night and had to be completed before the consolation game on Tuesday. The championship game was played at 6:30 p.m. Tuesday night.