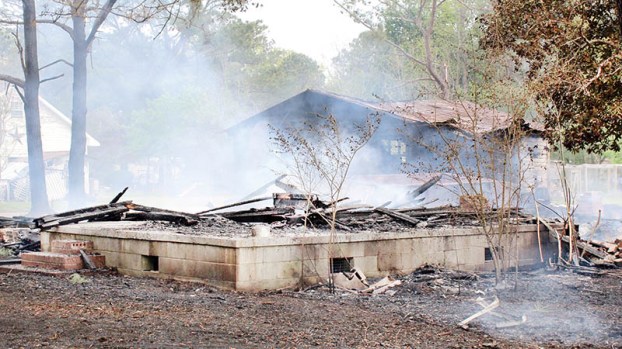 The cinderblock foundation is all that remains of a once-stately two-story wood-frame house completely destroyed by fire Thursday night on NC Hwy 42 in Powellsville. The house had been abandoned for some time. | Staff photos by Gene Motley

POWELLSVILLE – A late evening brush fire that raged out of control here Thursday evening destroyed an aged abandoned two-story wood frame house and two surrounding barns before it was finally contained near dawn.

According to Powellsville Assistant Fire Chief Ralph Brinkley, his department received a call around 7:47 p.m. Thursday of a large blaze at 142 Highway 42, just outside the town limits.

Brinkley said by the time the first of two pumpers arrived just before 8 p.m., the larger structure was completely engulfed in flames. 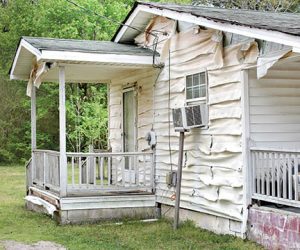 Melted and singed aluminum siding is visible from a house adjacent to the abandoned home that was destroyed by Thursday’s fire in Powellsville.

Brinkley said some 16 Powellsville volunteer fire fighters – and an additional 10-to-12 more from the Trap Volunteer Fire Department, which brought a pumper as well – battled the blaze until approximately 10:15 p.m. when it was believed to have been contained. Fortunately for the crews, a hydrant was located across the highway.

Meanwhile, the Powellsville units had to later return to the same location at about 4:30 a.m. to battle an adjacent inferno which erupted when embers from the house fire were believed to have ignited a second utility barn nearby. Despite the fire fighters’ best efforts, which lasted for about an hour, the third structure, an old modular home used for storage, was also completely consumed.

The second blaze also burned through some power lines, causing an outage for about two hours before Dominion restored electricity to residents as far east as Brown Road.

Brinkley said according to his investigation, the property owner, Bruce Watford, had been burning some brush near his residence when large gusts of wind began to blow sparks toward the older house next door. Watford valiantly tried to extinguish the out-of-control flames, but it continued to rage due to the high winds, and by that time a call went out for greater assistance to battle the blaze.

Brinkley said there is no damage estimate on Watford’s total property loss.

Also damaged was a second home, adjoining the wood structures, which suffered heat damage that warped and melted that home’s aluminum siding.