SMITHFIELD – The North Carolina Highway Patrol in Johnston County has a new leader. Sgt. Derek L. Mobley was recently promoted to First Sergeant. He had been serving as interim first sergeant for about a month.

Mobley has been patrolling Johnston County roadways for several years and is familiar with the county, the residents, and makes his home here. 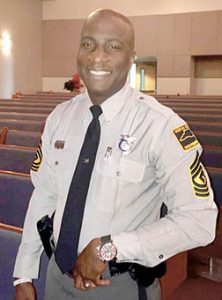 Mobley, a native of Baltimore, Maryland, grew up in Ahoskie in rural Hertford County where he graduated from Hertford County High School before attending Elizabeth City State University briefly.

After college, he moved to Raleigh and took a full time job in hotel management. In 1997, he joined the Highway Patrol and after completing the training academy was assigned as a trooper in Fayetteville.

Mobley worked security for former Governor Mike Easley and later was assigned to the Highway Patrol Headquarters in Raleigh. He was promoted and returned to the Fayetteville district and then transferred to Johnston County where Mobley and his family now live.

It should be noted that Mobley has learned the importance of an education as he recently completed a BS degree in Business Management from University of Phoenix.

“I’m very excited for the new challenge, which isn’t all that new since I’ve been here in Johnston County for some time,” First Sergeant Mobley remarked while sitting behind his desk at the Patrol Office in Smithfield. “It made the transition very smooth.”

“The general public will not notice any big changes,” Mobley says. “It’s going to be business as usual. The troopers know what is expected of them. With me being here the foundation has already been set.”

Mobley said troopers will continue with efforts to remove impaired drivers from the roadways, cut down on speeders and reckless motorists, continue with seat belt enforcement, and reduce fatalities.

Twenty-six troopers are assigned to Johnston County along with three sergeants. Currently, the county has 7 trooper vacancies.

First Sergeant Mobley, 46, and his wife, Donna, have two daughters, Jasmine and Sydnee. They live in the Cleveland community.

While not on patrol, Mobley said he enjoys golfing and cooking.

Derek is the son of Leonard and Annie Mobley of Ahoskie.