The host and defending champion, Eagles will be joined by three other Roanoke-Chowan area teams. 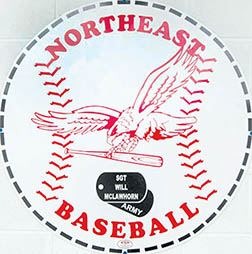 Opening day, Monday at 4 p.m., a brief pre-game ceremony will be held prior to the teams taking to the field whereupon the Rev. Will McLawhorn, Sgt. McLawhorn’s father, will throw out the ceremonial first pitch.

Tuesday at 4 p.m., Monday’s losers will face off in the consolation game with Monday’s winners playing in the nightcap for the tournament championship. First pitch is set for 6:30 p.m.

Admission will be $5 per day for both games and concessions will be sold. Souvenir T-shirts and caps will also be available with all proceeds going toward the scholarships. Organizers are encouraging attendees to make concession and T-shirt purchases, as the monies raised go directly to support Sgt. Will McLawhorn Scholarship student-athletes.

The tournament is played annually around Easter break in honor of the late Sgt. Will McLawhorn, a Northeast Academy graduate who was killed in action while serving in the U.S. Army stationed in Afghanistan.

McLawhorn played baseball and basketball at Northeast, graduating in 2005.

In 2006 Will enlisted in the U.S. Army and officially became an infantryman in 2007. He later graduated from Air Assault training and earned his Air Assault wings. In 2010, McLawhorn deployed with his unit to Afghanistan where he tragically died that same year.

“Will loved his country and wanted to protect it even if it meant giving his life,” said his father, retired minister, Rev. Will McLawhorn, Sr. of Conway. “He loved his band of brothers who affectionately called him ‘Claw’.”