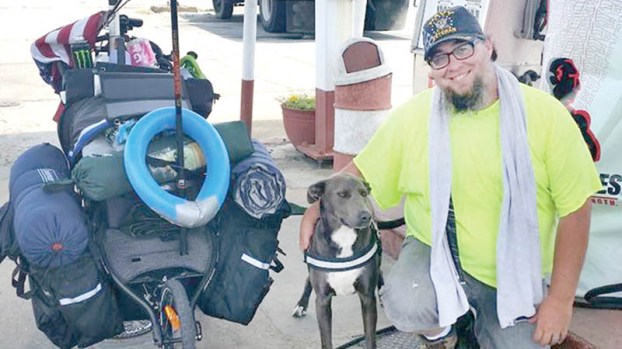 Marking the 100th mile of a coast-to-coast trek, Joe Copeland and Mollie pose for a photo under the canopy at the Flythe Brothers Shell Station when they passed through Conway on Tuesday. | Photo by Rachel Chapel 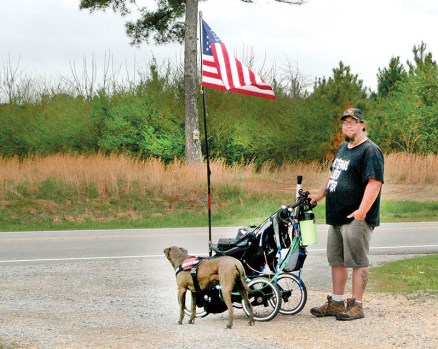 With his trusty canine companion Mollie by his side, Jiuseppe “Joe” Copeland strikes out on Thursday morning of this week from Christie’s Flowers and Gifts on US 158 in Northampton County on the next leg of his walk across America. | Staff Photo by Holly Taylor

With an American flag waving overhead and his service dog Mollie by his side, Jiuseppe Copeland is walking across America. Better known to everyone as “Joe,” Copeland’s goal is to walk from one coast to the other to raise awareness for military veterans with Post-Traumatic Stress Disorder (PTSD).

Always a lover of exploration, Copeland began planning his walk two years ago, but originally didn’t have a goal in mind. But a sobering statistic from 2012 about veteran suicide deaths vastly outnumbering active duty combat deaths stuck with Copeland and gave him a purpose for his journey.

He’s calling his trek “Walk to End 22.” The number refers to the amount of veterans who commit suicide every day. Copeland, a Navy SeaBee veteran himself, was diagnosed with combat PTSD after his tour of duty in Iraq and Kuwait. Knowing what his fellow veterans were facing day to day, Copeland wanted to do something to help.

Copeland says he knew he didn’t have enough resources alone to stop the epidemic, but he hopes his walk will inspire more people to help.

He began his journey on March 20 at the Ocean View Inn near Virginia Beach.

“It was actually snowing a little that day,” he recalls.

Since then he’s made his way into North Carolina, and on April 4 reached his hundredth mile on Highway 158 right outside of Conway at Flythe Brothers Mini Storage, where owner Rachel Flythe Capel let him stay the night. Capel and her husband also fed Copeland supper that same night, pork chops and all the trimmings prepared by “Shaky Ray” Allen.

“Everybody has been super generous,” he says of his trip so far.

He’s been surprised with how many people have offered places to stay or given him donations and camping equipment along the way.

He has a Gofundme account, but he’s received so many donations from people on the road, that he hasn’t needed to tap into the account so far. Any money he has left in the Gofundme account at the conclusion of his journey will go to “End 22,” a nonprofit organization from Virginia Beach working to help veterans with PTSD and to end the suicide rate among them.

Other than tired feet and a new tan, Copeland’s biggest problem has been a few places that took issue with his service dog. Mollie, a year old Blue Lacy dog, is a PTSD emotional support animal, trained to respond to Copeland’s body language.

It is, in fact, legal to carry a service animal anywhere the owner can go.

Despite that issue, Copeland has enjoyed the walking experience so far. His goal is to walk at least 10 miles a day and to conclude his journey in Long Beach, California in about a year’s time. He plans to make a few stops to visit family along the way, and when his two sons are out of school for the summer, his wife will bring them from their home in Austin, Texas to wherever he is to visit.

“That’s been the worse thing,” he says of not being able to see his wife and children every day.

But Copeland says that his wife has been the most supportive of all, encouraging him to do the walk even when he had doubts about it.

With a repurposed stroller to carry all his gear, Copeland and Mollie will continue their roughly 3,500 mile trek to raise as much awareness as possible. One woman he met who lost a brother to suicide has already offered to walk with him for a few days in support.

“If I could inspire one person to choose life, then it’ll be worth it,” Copeland says.