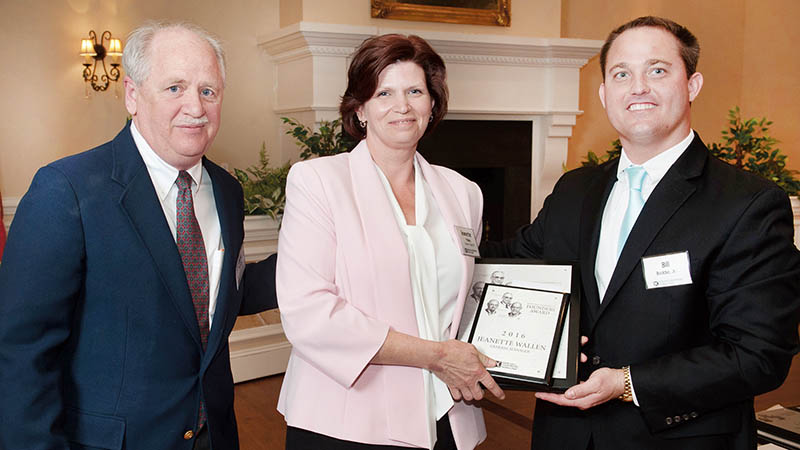 AHOSKIE – Jeanette Wallen of the Hardee’s® at 104 NC-561, Ahoskie, has won the Founders Award, which is the top award given out by the largest Hardee’s franchisee in the country, Boddie-Noell Enterprises.

The Founders Award is given annually to the company’s top 10 restaurant general managers and top two district managers.

The individuals and restaurants represent the best among the 338 Hardee’s restaurants operated by the company across four states. The winners were selected on an established set of criteria for operational excellence in 2016.

The annual award is given in honor of the company’s three founders, Mayo Boddie, Sr., the late Nicholas Boddie, Jr. and the late W. Carleton Noell, who opened Boddie-Noell’s first Hardee’s in 1962.

“Jeanette’s built the team, maintained sales and done everything right,” said Gene Dickens, regional vice president for Boddie-Noell Enterprises. “With every challenge we’ve given her, she’s risen to the occasion.”

The annual recognition and celebration of the winners was held at the company’s Rose Hill Conference Center near Nashville, N.C. Winning general managers received a cash award and a plaque. Cash awards were also presented to the restaurant team for their 2016 performance.

With over 50 years success as a Hardee’s franchisee, family-owned Boddie-Noell is the largest Hardee’s franchise operator in the United States with 338 restaurant locations in four states. The company is based in Rocky Mount, N.C. For more information, visit www.bneinc.com.