MURFREESBORO – Chowan University’s softball team upped their record to 24-16 overall and 6-1 in the CIAA here Saturday after sweeping a doubleheader from Elizabeth City State University.

Senior pitcher Kayla Robins pitched a no hitter and struck out 10 batters in a 23-0 game-one rout while freshman Shelby Griffis pitched a perfect game in an 8-0 game two win. 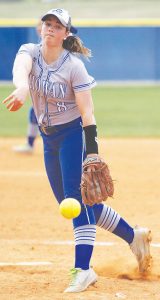 Chowan’s Kayla Robins, who leads the nation in strikeouts with 233 and in shutouts with eight, picked up more of each on Saturday as the Lady Hawks swept Elizabeth City State in a softball double-header, 23-0 and 8-0. Robins won the first game. | Next Level Photos / Charles Revelle

Robins pitched her way to her 15th win of the season and her second no hitter of the year. She struck out 10 Lady Vikings in a short five innings of work.

Griffis pitched a perfect game, the first of the season and first of her college career, in an 8-0 second game win. The last time a CU pitcher threw a perfect game was March 2016 when Audrey Hubbard shut down Livingstone College in a CIAA cross divisional game.

The Hawks tallied eight hits as a squad with Simmons leading the way with a 2-for-3 plate performance while Baccus was 1-for-2 with a two run home run.

Elizabeth City State fell to 1-17 on the year and 0-5 in the CIAA after Saturday’s losses.

The Hawks will hit the field at home one last time this season Saturday, April 8, when Virginia State University comes to town for a CIAA Northern Division match up. These games will also serve as Senior Day for six Chowan seniors.