He joined the Chowan faculty in 1971 as professor and chair of the Department of Science; serving as department chair for many years. He retired as Distinguished Professor of Chemistry in 2016.

He and his wife Erin were married in 1963 and have two daughters, Yolanda Faile Pataky and Leah Faile Barrett. Yolanda graduated from Chowan in 1989. The Faile’s are active members of Murfreesboro Baptist Church where he has served on the board of deacons, Sunday School teacher for the college students and as Church Clerk. He has been a supporter of local libraries, having served on the boards of the Elizabeth Sewell Library in Murfreesboro and the Albemarle Regional Library in Winton. 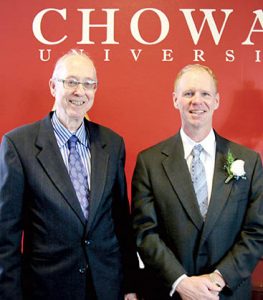 Over his 45 years of service to the University, Dr. Faile left many deep impressions in the academics and structure of the University itself. But his most powerful influence is clearly displayed by the lives of his students. His power is so great, in fact, that an anonymous former student established the Garth D. Faile Science Scholarship Endowment Fund in his honor, so that his name and his legacy will continue at Chowan, changing students’ lives one at a time as he has always done, and bringing great joy to the entire Chowan family.

Dr. Heather McGuire shares, “After 45 years at Chowan University, Dr. Faile’s enthusiasm for teaching is undiminished. When I feel mine waning, I wander upstairs. I see Dr. Faile sitting in a classroom beside a student. She is sitting in the chair she sits in every day. She is at ease because Dr. Faile was thoughtful enough to conduct business on her turf. He is patiently guiding her through a problem (for what must be at least the thousandth time in his career). I am renewed.”

The Garth D. Faile Science Scholarship Endowment Fund will provide financial assistance to a worthy and full-time student majoring in science. The student must have a 3.0 or higher grade point average and reside in North Carolina or Virginia. The donor, who wishes to remain anonymous, is a medical doctor who was taught and mentored by Dr. Faile. The scholarship expresses the donor’s love and appreciation for Dr. Faile as a professor and mentor and her commitment to Christian higher education and the values held by the University.

Dr. Faile’s awards and honors over the course of his long and distinguished career include:

News Herald Citizen of the Week, 1992