MURFREESBORO – Chowan University announces Kevin Wilson as the 2017 recipient of the Mary Frances Hobson Prize for Distinguished Achievement in Arts and Letters.

Wilson is best known for his 2011 novel The Family Fang, which was turned into a film in 2015. Starring Nicole Kidman and Jason Bateman, it premiered at the Toronto International Film Festival. Selected by Barnes & Nobel Discover Great New Writers program, it is an original and refreshing novel about “a family of artists who live to make others uncomfortable.” Time, Amazon, Kirkus, People, Salon, Esquire, and others named it A Best Book of the Year. 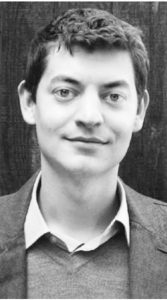 The prize will be conferred on Monday, April 3 during a 6 p.m. dinner in the Chowan Room in Thomas Dining Hall. Following the dinner and conferral, Wilson will deliver the Hobson Lecture at 7:30 p.m. in Vaughan Auditorium in Robert Marks Hall. The annual event brings the university and community together each spring to celebrate the accomplishments of an author of the South or who writes about the South.

Perfect Little World, Wilson’s most recent novel, was published in January 2017. The odd novel is about a new mother who joins the Infinite Family Project, which is an experiment where ten children are raised collectively, without knowing who their actual parents are. Prior to its publication, the novel was listed as an anticipated book by W, The Millions, InStyle, Popsugar, and The Charlotte Observer. Kirkus Reviews described the novel as “another bittersweet story about messed-up families from the talented Wilson” and “a moving and sincere reflection on what it truly means to become a family.” Publishers Weekly wrote, “the author of The Family Fang invents another unusual family structure for his sweet and thoroughly satisfying second novel.”

Wilson’s short stories have appeared in Ploughshares, Tin House, One Story, Greensboro Review, Oxford American, Carolina Quarterly, Ecotone, Cincinnati Review, and elsewhere. His stories have also been included in New Stories from the South: The Year’s Best in 2005 and 2006. He has received fellowships from the MacDowell Colony, Yaddo, and the KHN Center for the Arts and served as a visiting faculty for the Yale Writers’ Conference in 2013.

Born and raised in rural Tennessee, Wilson is a fiction writer known for his sharp, inventive stories that center on families in quirky settings. Wilson attended Vanderbilt University (B.A.) and the University of Florida (M.F.A.), where he studied writing under the tutelage of 2002 Hobson Prize recipient Padgett Powell.

Wilson continues to reside in rural Tennessee with his wife, Leigh Anne Couch, a poet, and his sons, Griff and Patch, where he is an Assistant Professor of English and Coordinator of the Certificate in Creative Writing at Sewanee: The University of the South.

The Mary Frances Hobson Lecture and Prize for Distinguished Achievement in Arts and Letters is awarded annually by Chowan University to recognize the distinguished achievement of a person in the field of arts and letters. Preference is given to Southern writers and poets or those authors whose work relates to the South.

The recipient, who receives a medallion and monetary gift, presents a lecture entitled “The Mary Frances Hobson Lecture,” which is open to all area residents, Chowan University students and personnel, and all enthusiasts of the arts and letters in the region. Initiated in 1995 by the Hobson Family Foundation of San Francisco, the award serves as a memorial to Mary Frances Hobson (1912-1993), a journalist and poet, who was the first woman to receive the Algernon Sydney Sullivan Award in journalism from the University of North Carolina.

PAWS Kibbles: One is Too Many

By Libby Whitaker Earlier this month, the American Society for the Prevention of Cruelty to Animals (ASPCA) released encouraging new... read more