AHOSKIE – Ridgecroft School students (Pre-K through 3rd grade) were captivated by science after observing an elephant toothpaste experiment conducted by Dr. Brian Duffy, new Chowan University Professor of Chemistry, when he visited the private school in Ahoskie on March 9. 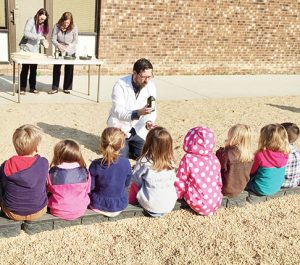 Dr. Duffy explained, “Hydrogen peroxide normally breaks down into a large amount of water and oxygen gas, but slowly over time. However, the presence of the aforementioned catalyst speeds up the process. The liquid mixture traps the oxygen, which is quickly released, creating foamy bubbles that explode out of the container.”

The students were thrilled to see the chemical reaction as the green and red foam Dr. Duffy dubs elephant toothpaste shot out of two glass beakers. The children cooed with excitement, stating, “Wow, it’s amazing”; “That is so cool”; and “It’s so sparkly.” They were mesmerized by the phenomenal reaction made by combining a few simple items found in almost any home.

Dr. Duffy is a first-year professor at Chowan University who teaches general and organic chemistry. He earned his PhD in chemistry from Syracuse University, and his MS in Chemistry and BS in biochemistry from East Carolina University.

He shared, “I have always enjoyed teaching and performing demonstrations to exhibit how fun science can be.”

He and his wife, Chelsea, have two children, Connor and Chloe, and reside in Murfreesboro.