TRAP – There was devastation, but it could have been worse. Much worse.

No injuries have been reported after a tornado, as classified by the National Weather Service, lay a swath of destruction across northern Bertie County on Friday. 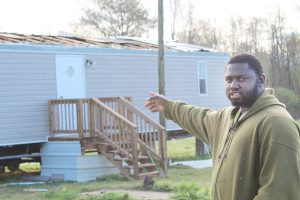 Otis White points to the roof of his home on Quebec Road near Trap that was damaged by Friday evening’s tornado. News-Herald Photo / Gene Motley

The Trap community along the 300 block area of Quebec Road appeared to suffer the worst effects of damage.

“It sounded like a freight train,” said Otis White of 344 Quebec Road. “I’d always heard that’s what they sounded like, but now I know it’s true.

White says he, his girlfriend, and her four children, ages 5-thru-10, were at home around 5:30 p.m. in his single-wide modular home unit when they saw the ugly dark cloud appear on the horizon rapidly rumbling its way eastward across the flat, open farmland.

“I usually don’t watch the news,” he recounted, “but something told me the turn it on, and when I did, I heard them say there were reports of a tornado around the Glover’s Crossroads area.

White said his first instinct was to head to his grandmother’s home nearby, but quickly realized there wasn’t enough time for everyone to be evacuated.

White says he followed the tornado safety procedures he had been taught: he gathered everyone in the living room – the most central portion of their home – and they all lay stretched out on the floor. He then covered everyone as best he could with his body, each one clinging tightly to one another.

“We just kept praying, and praying,” he said in a low voice.

As the behemoth of nature roared its way closer, White says the greatest force he felt wasn’t rain or hailstones, but the mighty rushing wind.

“That wind was fierce,” White recalled. “It was so strong it pulled the air conditioner right out of the window, the kitchen table flew across the floor, and the whole trailer shook, like it was being lifted off the ground.”

It was then they heard a sharp, shearing sound. It was the roof of the trailer being ripped loose as if by a can opener.

“Then everything went real quiet,” he noted.

White said time wise, it felt like a brief eternity, but realized later that it had only been a couple of minutes.

“Everything was so dark,” he reported, “real dark, and then all of a sudden it got real light.”

As everyone rose from the floor, White says his neighbors were running up the dirt road path to the house. Collectively, they raised a tarp and spread it to try and cover the roof opening.

“Then, five minutes later, it turned dark again,” he said.

As the second storm system passed over White noted this time around was just heavy downpours.

The inside of the home soaked, White said the family also lost electric power lasting overnight until early Saturday.

Also Saturday, neighbors continued to stop by his residents to offer comfort and support to the family, as well as help him complete the covering over the hole in his roof.

On either side of White there was more destruction. An abandoned trailer facing the road, not 100 feet away, was completely demolished, its remnants strewn across a 100-yard stretch; some articles had even attached themselves to the limbs in a nearby line of trees.

The Watfords were both at home when the high winds struck.

“We were just sitting at the kitchen table, when suddenly there was a load crash of glass as our screen door was blown out, and then – boom,” Watford said.

Pieces of fiberglass ripped through the wire porch screening at the Watford home, but the most damage was his 60-plus foot aluminum shed which was ripped from its mooring, tossed nearly fifty yards away and crumpled as if it were a toy, exposing the former covered contents in the Saturday sun.

Other Trap residents interviewed said the tornado may have tested their faith, but their resolve remains strong.

White hopes to complete the patio he started on last fall. Like his fellow neighbors, he vows to remain there, as firmly entrenched as the Bertie soil beneath him.